A bit of a limbo day

We're having a bit of an odd day here, mostly because we need to keep the house perfectly clean and straight and so that limits what we do.

Right now, a professional photographer is here taking photos of the house for our architect. So this morning involved vacuuming and putting things away and of course things start to go wrong. I got the dust cyclinder of our new vacuum cleaner jammed in incorrectly and it took Tim about an hour to take it apart and fix it. We had to put a lot of things like the electric toothbrushes away so now the house sparkles (according to Tim).  And later this afternoon our neighbors from Eugene are coming by--they got a last minute booking in Pacific City and will come over for a drink and to see the house.

It was pouring down rain this morning, but all of a sudden it just magically cleared up and now we have this: 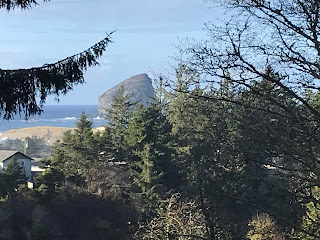 I brought three projects out with me--the mitts are almost done, the grey sweater slowly grows, and the new cross stitch project needs the lighted magnifying mirror that I did not bring up with me. Curses!

That could be THE perfect book for Allison for Christmas. My library masters girl!

I bet the house looked amazing!!!

Pretty cool to have professional pics of the house!
The view and the day knitting is wonderful......