Did you ever have one of those thoughts?

You know, those thoughts that go something like--"wasn't I working on a project where I put beads on something? What was that project?"

That was me yesterday. I was sorting quickly through my memory trying to figure out what project  I was trying to recall (answer: beaded mitts). So I'm either too busy or have too many projects, probably both.

The cowl is coming along: 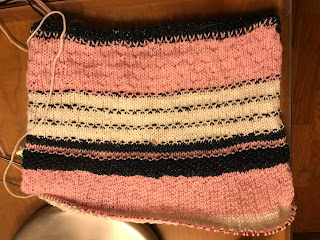 I worked on this while watching "The Romanovs" last night on Amazon. Have you seen it or heard about it? It is by the guy who did Mad Men and is an 'anthology' of stories about people who descended from the Romanovs (the Russian monarchy). We've seen two in the series (they drop every Friday, and there are currently five) and they're well done and well acted and ODD. Which sometimes we need.

There was frost on rooftops this morning and Thanksgiving is two weeks away!
on November 08, 2018

The cowl looks great! No beaded thoughts for me (thank goodness) - it's bad enough that when I wake up in the middle of the night I find that I'm counting (like stitches in a pattern). Oy vey!

I had heard about the Romanovs, but haven't seen any episodes. Was wondering what it ws like. We are into the latest season of "A Place to Call Home" and I want to see the 4 part cooking series "Salt Fat Acid Heat"

Ooooo! I've been wanting to watch the Romanovs! Thanks for the reminder . . . that it's out and I'm already behind! And that cowl is lovely. XO

Love the way the cowl is shaping up!

Do you add beads with a crochet hook or do you thread them on the yarn before knitting? Love how the cowl is progressing.

I haven't started watching yet, but I'm looking forward to binging on the Romanovs. I worked with one of the descendants for a brief period and I'm excited to learn more about the family.

Oop! Forgot to include - Love the cowl! It looks like it would be a fun, easy but non-boring project.