Greetings from the Coast!

I came over to the coast house yesterday morning and Tim got here later in the afternoon. I toted out the dogs and the bird, food for Thanksgiving (although I left the beer in the garage--drat!), pillows (we've been toting pillows back and forth but that's a disaster waiting to happen), tools, and Christmas lights. Tim brought out a television and a stand for it.

Driving out, I passes at least half a dozen fire engines on the Interstate. They were from coastal communities in the Northern part of Oregon, and I guessed they were returning from fighting the Cali fires. I opened the sunroof and gave them a 'thumbs up' as I encountered them--I hope they saw. They deserve so may thanks.

It was Tim's birthday yesterday and we celebrated by going to a restaurant in Lincoln City (about 20 miles south of here) because all the 'good' restaurants in our little town shorten their hours in the Winter so they're only open Thursday-Sunday.  So we went to a place called Kyllos that is right on the beach (although it was dark, so who cares) and has great seafood. It was jam packed---maybe people started their vacation early? Or everything is closed so that's where everyone went? Anyway, it was lively and fun.

I gave Tim a bread rising bowl and tickets to see Lyle Lovett and John Hiatt in February, so birthday celebrations will continue.

Yesterday was lovely when I arrived--almost 60 and sunny. That has all changed as it is supposed to be rainy and windy through Friday. However, now that some of the leaves have blown off the trees, we have a bit more of a view. This is Cape Kiwanda, which you can now see from the southwest corner of our driveway (and future pickle ball court) and from the southwest corner of the deck. 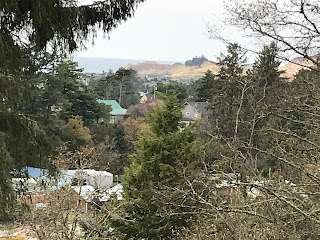 I brought out the mitts to finish off while we're here (along with the grey sweater) and photographed them on the granite. You can now see the beads!! 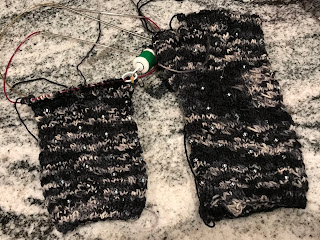 Finally, did you see what Kathy knit? This has to be the cutest thing ever. Small animals born in winter often need help staying warm--Ann (at Aragon Alpacas) tries to have crias (baby alpacas) born in summer but sometimes you can't help it. Tinkerbell's next cria is due at the end of April/start of May, which I think is plenty of time for Kathy to knit a cria sweater (just kidding Kathy).

I hope the firefighters saw your "Thumbs Up" because they are true heroes. Enjoy your time at the coast.

Enjoy your first Thanksgiving in your coast house!
XO

Nice trip to the beach house! Great view of the mitts now, too!

Happy belated birthday to Tim.Sounds like a nice celebration with more to come.

I'll bet Thanksgiving at the Coast was wonderful. The concert in February sounds great!!!