This is the first day in a long time I haven't had to be somewhere or had a deadline hanging over my head that had to be attended to. I have a research grant proposal deadline on 12/1 but that is done save for a final spell check and pulling some references from Google Scholar (maybe ten?). I would guess maybe an hour or so and that's done. Another revise and resubmit paper is due 1/20/19, and that is pretty much done (again, a final spell check and some formatting). My syllabus for Winter term is done (!!!!!).  I have two book projects that need some attention but the publisher is way behind on his publishing stuff (he's a small, one-man shop) and so I'm not in any rush to get those done.

It feels kind of nice. I feel like I can breathe a bit and not rush from one thing to another. I do need to go by the post office and mail a package for a swap I'm doing on Ravelry, and pick up milk and those things are so much less stressful than, say, figuring out if a paper is plagerized (and not even a student paper--a paper submitted to a journal I deputy edit).

I've been working diligently (ha!) on the banner for Christmas, and have two more letters almost done: 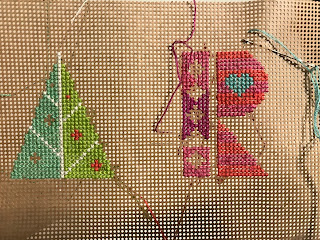 I find that I like getting the 'big hunks' of things done and then I can go back and fill in the 'details' later. This is an A and an R, in case you were wondering.

Thank you for your nice comments on my WIPs!

Ugh, I always dreaded checking for plagiarism. I hope you find even more "breathing room" in your busy schedule. Happy stitching

I am so glad you are having a restful quiet day . You deserve it.

There's nothing like a calm day in the middle of busy!