Isn't November just zooming by? It is less than two weeks til Thanksgiving, 11 days til Tim's birthday, and 11 days til we decamp for a five nights to the coast house. The only thing that really means is that I have to have Thanksgiving shopped for before we leave (we are thinking duck--and I have a few sides that are supposed to be good with duck). (Dessert. Must think dessert).

We do have a grocery store in town on the coast--it is called Chester's and as benefitting a grocery store in a vacation town, it is well stocked in frozen pizza, chips, ice cream, and beer and wine. It also has a liquor 'aisle'---in most of Oregon, you can only buy hard liquor at a hard liquor store, but I guess in small towns they make exceptions? It's the same with gas--you can't pump your own except in small towns (and on Native American casino property). So anyway, I don't think we'd find duck at the Chester's. We can also drive 15 minutes to Lincoln City but I think I'll just organize it all to be able to tote it over before we go.

There has been a bit of knitting, and this is the 'boxed and cabled' pattern. I'm kind of a sucker for interesting/non conventional sweater patterns, and this is one. I'm currently working on one of the front 'sides': 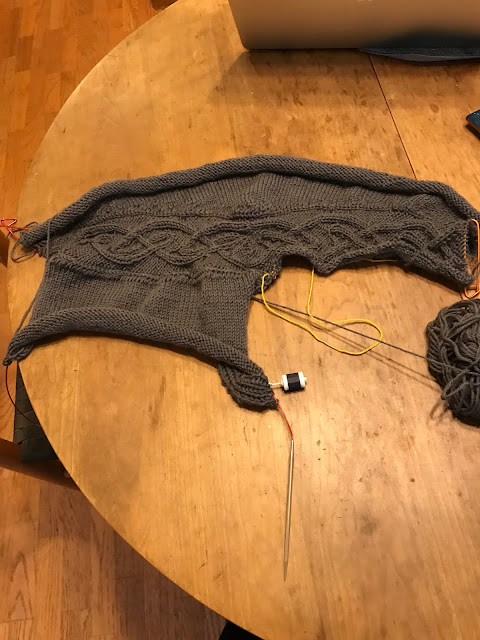 Right now it looks like of baby poop brown but it is actually dark gray--I guess it is a warm dark grey and that is why it looks kind of brown on the iPhone.

And it's cold here! 28 degrees this morning. There's frost on all the roofs. I don't think I have any place I need to go today--and there's chili in the refrigerator that I made yesterday. Chili is one of those few things I make well, and yesterday I grilled the meat and the veggies on the grill  and just threw them in a pot with crushed tomatoes and beans and it turned out delicious.

I'm reading "Nine Perfect Strangers" by Liane Moriarty and on one hand it is taking a while to get started and on the other I've only been reading it about ten minutes a night for the past three nights so that might explain that. I don't know why but this year's time change really messed with me, sleep wise, and it shouldn't---shouldn't one be really tired when one's 'normal' bed time comes around? Yeah, not me. But I might be back on track now.

Have a lovely day! Thanks for visiting the blog!!

That sweater is so pretty and interesting. I want to see more pictures - lol.

Thanksgiving on the coast sounds lovely. Chilly here this a.m. too (32).

How fun for you to have Thanksgiving at your coast house! What a great celebration! I'll bet you wish you already had that sweater finished and ON YOU today in the chill. XO

The sweaters construction looks interesting, says one who has only knit simple sweaters for children. I'm going to meet my sister and nephew's family at my great-niece's house for Thanksgiving. It should be fun.

Your sweater is beautiful. I always admire your work Kim. I guess the time change is effecting me. I hadn't given it much thought. Your Thanksgiving plans sound wonderful I get to see my sister for the first time in a year. A real family Thanksgiving !

I love seeing the sweater progress! It looks like a very good knit!

Thanksgiving on the coast sounds wonderful. Can't wait to see your sweater progress.

The small town shopping rules are fascinating. And charming.