well, it is all sunsets and rainbows. 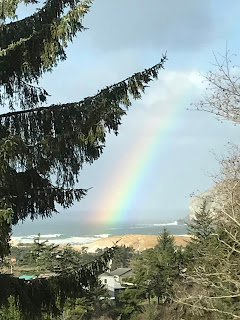 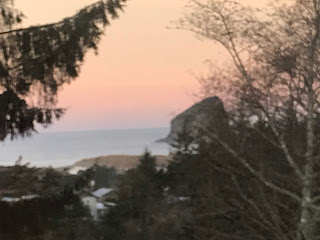 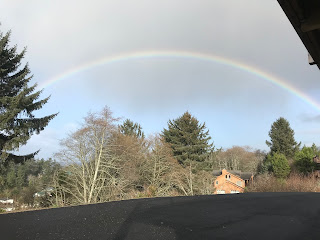 Yesterday was, to put it mildly, a crazy weather day.  The highlight, though, was the first sighting of a rainbow, and it was a good one! Not quite the perfect place to get the rock and the rainbow, but I'm not complaining. I think the sunset was from a few nights ago. Anyway, yesterday we also had rain (it was raining when I took the rainbow pictures), hail, a lot of wind, and sun.

We took the dogs down to the beach and hiked up the bluff to the whale watch station. So on the Oregon coast, volunteers staff 'whale watch stations' (basically good viewpoints) to help visitors see whales and spew off whale facts. Theoretically (and I say this because we have no visual evidence), grey whales travel south during the week between Christmas and New Years to their feeding grounds in Baha and then North during Spring Break week to go back to Northern Alaska.

I've always kind of rolled my eyes at this, because HOW DO THE WHALES KNOW WHEN SCHOOL BREAKS ARE but never mind.

Anyway, we are technically in the midst of the winter migration but the volunteers yesterday had only seen two whales in the hour or so that they had been watching. Since the whales are fairly far out (they're not hungry as they've just finished their summer feed and are focused on getting down south to start their winter feed) and the best way to spot them is to see their spouts. However, with so much wind yesterday, the spouts disperse immediately so it is almost impossible to see them.

Or, they're just not there.

Anyway, I kept checking from here (with binoculars) yesterday and no spouts. It is calmer today so maybe we'll see something.

And in knitting news: 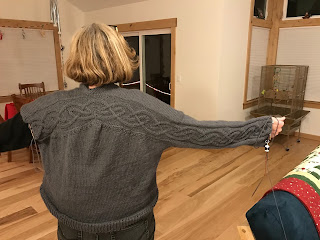 I finished the cabling on one arm and just have the cuff to do. Then comes the other arm. It looks pretty cool if I do say so myself.

And the sock is coming along as well. 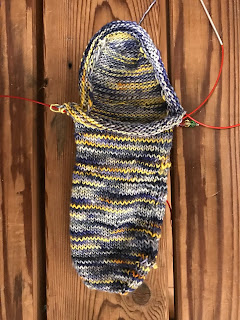 Today we'll watch the Ducks take on Michigan State in the RidiculousNamed Bowl (the Redbox bowl, how 2007) and then tonight we'll play the escape room game and another board game and see if we can stay up to welcome in the New Year.

Wow, your sweater is a beauty!

Great looking sweater-you are getting close to a real wear!
Beautiful photos of your view of the rock!

That sweater is gorgeous! Love the rainbow pics. We've had plenty of rain, but no rainbows that I've seen.

I LOVE the sweater (we call them 'jumpers' over here!) Really like that colour ~ and the cables. I can't do cables.
I am catching up on blogs ~ haven't even looked at mine for ages ~ and when I read about the escape room game I had to comment! I had never heard of it until last Christmas. I spent the holidays with Stella, Rich and the Pies and Kezia was given one of the games as a present. Stella, Kezia and Cl and I played it that night and it was just such fun.
Hope to update my poor neglected blog soon.
Until then . . .
best wishes
Rosy