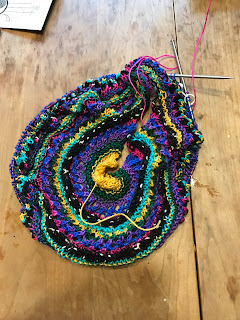 I really like how it looks in this yarn, sort of like one of those crocheted mandalas. That is, if I had straightened it out carefully as opposed to plop it dwn on the table as a big blob,

So anyway, I am using a Size 5 needle and followed all the directions for the setup and for section 1 and 2 as written.

Section 3 begins with an increase row, and I did that row (row 1) and then added two rows.   The first row is on the wrong side and I did k2, [p4 m1] all the way across and ended with k2 (it might not have come out even, that's ok). Then I added a second row that was k2, [k4 m1] all the way across and ended with k2. Then I did the rest of the section as written--there is another increase on Round 9, and I just did the k6m1 11 times instead of 8 times and that seemed to work out fine. There's another increase in the final section that I'll just figure out when I get there.

This results in a cowl that will lay down pretty close to your neck (I think--hasn't been blocked yet) and that might be too 'chokey' for some people. You could add two additional rows at the start of section 3 to give yourself a bit more 'space'.

I hope that helps!

-secret project is going really, really well. I think it might be done for Christmas!
-I watched the Starz version of "Howards End" while Tim was gone. The movie version (with Anthony Hopkins and Emma Thompson and Helena Bonham-Carter) is one of my favorite movies of all time and the book is also a really good book (although I refer to it in my head as "Howards' Bleedin' End" in my Julie- Walters-in-Educating-Rita-voice). This version was really good, and it had Matthew MacFayden whom I love, and Tracey Ullman as Aunt Juley, and it was just really good).

Thanks Kim for helping us with the yarn size change for the cowl. I have some nice sock weight I'd like to try.
let the football knitting commence. Bears/Packers on in a few. FIreman will be happy to watch and I'll knit my blanket

I admire you for adapting Dewberry. As for me, I love the quickness of worsted weight! Besides, I'm always looking for an excuse to buy and knit Rios!