Yesterday was cold and rainy, and so after walking the dogs in the morning I decided to just stay in. I worked on three different projects--the grey sweater, the secret project, and the Mystery KAL.

The MKAL is called 'midwinter moon' and the idea is that you start in the dark (like it is out now) and then move to the light. So here are the first 40 or so rows: 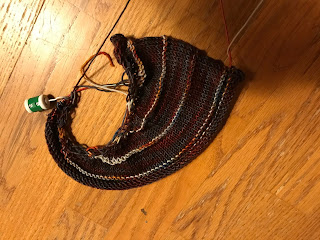 There are two colors here--the darkest (the biggest parts) and the medium (the lighter lines). The first 'clue' is this pattern repeated over and over, so I may be at the point where I can knit and read and do this. I like it so far.

I'm reading (along with "Once Upon  a River") a book called "The Dakota Winters" which is about a family named Winter who live in the Dakota apartment building in New York (that surprised you, didn't it? Honestly, I would generally quickly pass by a book called "The Dakota Winters" because I think it would be about--well---winter in North Dakota. But it isn't, it is interesting, and set in the early 1980s which was of course the heyday of my youth.  There is a sense of dread that is building and of course John Lennon was killed in front of the Dakota and he is a character in the book (and it isn't weird at all, I promise).

I needed a day like yesterday, and was joined by my loyal companion Pilot. 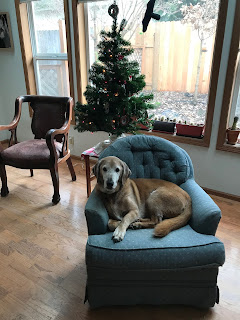 Today the rain has turned into thick, thick fog.  It was dark when we walked this morning and it is always a bit strange to be out as the day is starting when there is a heavy fog: 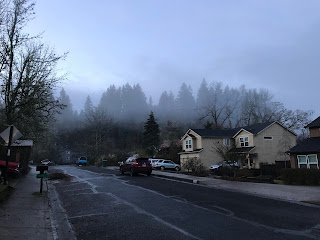 It was foggier than that looks.

I'm liking your mystery KAL - very pretty. I really don't mind the fog if I can be in...if I need to go out I do not like it at all!

Very interesting construction on the shawl! I like the light and dark contrasts! Driving in fog is no fun-a walk? That might be fun with the dogs, too!

Pilot looks like a sweetheart and a good companion.

It is hard to capture fog. When you do,it is amazing!