And another snow day!

We had five more inches overnight, bringing the total up to about 17" at our house. The plows came by yesterday, and our driveway was dug out and I'm guessing it might get dug out later today as well. Our electricity has stayed on so that's good.

Campus is closed yet again, so over three years we've had four hours of campus open.  I've used this closure to do some major catching up--the weekend event was great but it was working, and pushing other things off, and luckily I'm getting caught up. I got all my grading done for the second exam in my class, and everyone got the test in even during a closure, so I don't hate our course management system (the online system) as much as I usually do.

This just needs to get finished 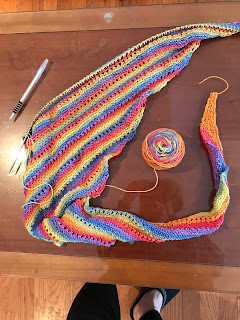 I have a bit of yarn left and I think it is just about time to bind off. It looks fun and bright and I like it.

I spent some time (as did Tim) winding up some yarn for future projects. A lot of this yarn came in some 'mill end' bags I bought from Blue Moon Fiber Arts mystery bags which are an amazing deal. Yesterday I wound up: 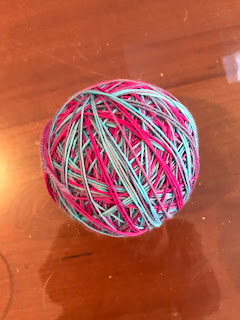 This is 500 yards of something--I think it is called Kalispell but it isn't in the Rav database. Tim did most of this winding. 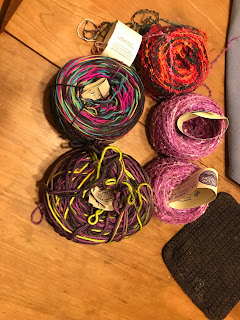 On the right hand side are three boucle yarns--two in light pink and purple and the top one is some bright reds and blues and greens. The pink ones will be a larger shawl and the bright one a smaller something. I thought about combining them but that might be a bridge too far.

On the left, on the bottom, is a yarn called Plushee which is really soft and mushy. I think I might make another hood with that.On the top is a brightly colored yarn called Willamette which is also not in the database.

I finished "Pants of Perspective" which is on Kindle Unlimited which was delightful. I also read "The Good Liar" which is another unreliable narrator book but there are three unreliable narrators. It was engaging.  Now I"m reading a book called "Half of What You Hear" which is kind of interesting. It is the story of a woman who used to work in the White House who gets fired (not sure exactly why, it is coming out little by little) and moves back to her husband's home town to run an inn with her husband. It is a tiny little town with lots of secrets secrets secrets that she starts to unravel as she interviews one of the oldest citizens of the town for a magazine article. I like it.

I continue to dip in and out of "Serving Victoria: Life in the Royal Household"  which is interesting and easy to put down.

It sounds like you're making very good use of your time off! Snow days get tiresome after a while, but it's always nice to have a day off. :-)

Despite your exterior world bing covered in white, you're working with some gorgeous colors! Glad that you got caught up on your grading during the extended snow day(s).

The colors are delightful for your projects-this shawl is very festive!