And then I exhaled

Because we're back on the beach!

There was a bit of a hazy sunset last night---it now stays lighter for a good 30 or 40 minutes later than the last time we were here (2.5 weeks ago, albeit it was miserable weather). 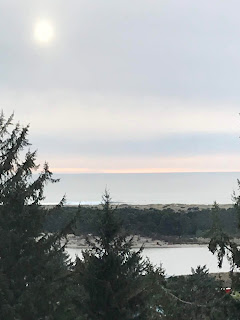 We got here around 4pm and spent a bit of time straightening things out after a lengthy power outage (the neighborhood was out because a street light---or should I say THE street light--needed some repairs) and that messed up the clocks as well as the elevator. After some odd getting-locked-in-the-elevator (and one getting-locked-out-of-the-elevator) experiences, Tim turned the breakers off for a few minutes and after that, the elevator did some wiggling and then starting working again. If the getting-locked-in thing sets you off (and I'm claustrophobic so I'm in that group), I found the emergency latch in about 15 seconds after I realized I couldn't open the door (I was in the elevator with all our stuff when I found out it wasn't working). We also have magic little levers that allow us to get into the elevator if it locks us out, and Tim figured that one out pretty quickly. OH THE FIRST WORLD PROBLEMS!

I had packed up pasta and jar sauce for a quick dinner, but we decided to pop over to the Pelican for dinner instead.  We went early (we were hungry!) and it was pretty empty (beach town in the winter, yay!) so we had a delicious dinner while we watched it get dark outside and had a large red ale (Tim) and a small cream ale (me). We came home and watched a documentary about cat ladies on Netflix, took a sauna, and went to bed pretty early and slept like rocks!

It is cold and breezy this morning--we are hoping for snow because we've never seen snow on the beach. It is a beautiful sunset--again, something we don't expect pretty sunrises on the west coast but we get them! 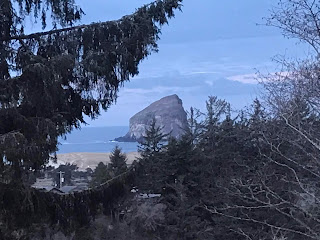 I did put my head down and powered through my stuff. I got the rest of this term almost all put together and got the syllabus and readings for the new class next term done. So I'm feeling pretty good about that. Thanks for your support!

I brought knitting but not embroidery out (two knitting projects and only four spare balls of yarn) but wanted to share the most recent Australian Letter progress. 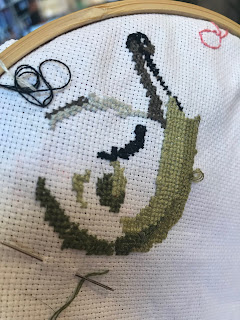 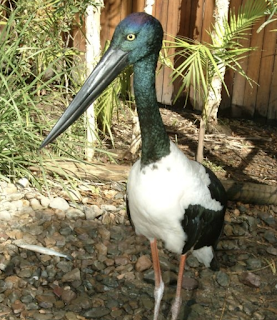 And now I"m singing the Beatle's song "Across the Universe" but instead of singing "Jackaroo Day**" I'm singing "Jabiru day". Sorry about that.

Hope your Friday is great!

**Guess what! These aren't the real lyrics. Oops! They're one of the most misheard lyrics of all time apparently. The real lyrics are "Jai guru deva".  I'm still going to sing Jaiburu day.

As much as I love you, I sort of hate you and your adventures right now.

I was stuck in an elevator for an hour at work once-on floor 8. It was , um, intense. Glad you are figuring out how to prepare for that!
The view is gorgeous! Glad you knuckled down and got a lot of work done so it won't bog you down! The new lyrics are more relevant! lol

Yikes, I hope the elevator doesnt decide to be temperamental when you're there alone. Glad you're having the opportunity to exhale and recharge this weekend.

I hope you get some beach snow!!!!! Im glad you went out to eat. Especially when you are starving! and tired from a drive!

Temperamental elevators - yuck! We have an Eiffel Tower replica at work and I end up having to walk down the open-stepped stairway just about every time I have to visit it because the elevator messes up. I'm more afraid of heights than claustrophobic so those stairs just absolutely kill me.

Glad you're getting sunsets and good food. Hope you get some snow.