And then I exhaled

I had no idea how badly I needed to escape Eugene til we got here. Eugene is very closed in, both literally and metaphorically. In Eugene, we live in a cozy house at the bottom of a valley. Dawn comes a wee bit later and sunset comes a wee bit earlier and while I love the coziness, add what ended up being about 18" of snow on top of that and it got claustrophobic.

Because it just keeps on coming
I ended up cancelling class yesterday (I think I told you that) because it was still icy and they hadn't cleared off any parking--I did an errand yesterday late morning and while the roads were fine, there is no on-street parking around campus and few lots seemed plowed. I had to go to the vet to pick up food for Jessie the cat, and so many things aren't plowed. Then it started snowing again and you could hear people screaming. Not really. The cable and Internet were out in the morning but it seemed to come back on right when we left.

Driving North
To get here, we drive north about sixty miles and then drive west about 40 miles and then drive northwest about 20 miles through curvy forest roads. Usually, north=colder. Yesterday, though, we noticed that as soon as we got about ten miles north of Eugene the snow cover was much, much less and by the time we got to Salem (which is where we turn left to go west) there was no snow at all.

I worked on this in the car. 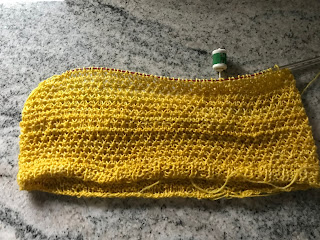 This is the Cashmere Paintbrush cowl that is pretty much a straightforward knit/purl/slip stitch pattern but the texture is quite lovely. I'm almost done with the yellow and the color will change to grey, then to black.

And then we arrived. 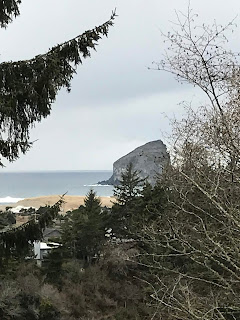 I know you're tired of this view but it is so nice to see it.

We got here and went to the pub for a quick early dinner (once the nice weather gets here, we'll never be able to go to the pub because it will be so crowded so we're enjoying it now). We ran into one of the guys who built our house, Ian, and so we chatted with him for a little bit. It made us feel a bit like 'locals', even though we will never be locals--someone told me it takes living here for three generations to be considered a local! That's a small fishing village for you.

"A ship in  harbor is safe...
But that is now what ships are for." John Shedd 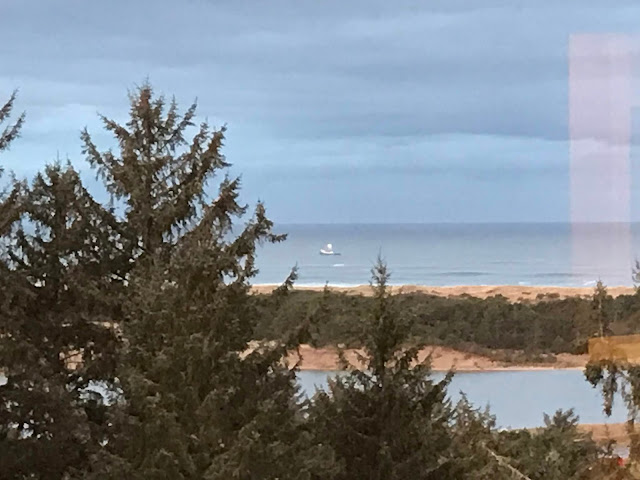 This little boat was out last night and was still out this morning. We could see its bright lights and wonder if it is our Pacific City version of 'deadliest catch'--going out to check crab traps. They had fresh whole crab at the grocery yesterday so it might be.  I'm not sure why we didn't buy a few but now I'm kicking myself for not doing that, but maybe we'll pop down later today and see if they had any. They had a lot of seafood last night and the weather is supposed to stay nice so maybe they'll get more from the dories. The price was pretty good too--about $10 a pound for whole crabs.

Have I told you about the dories? Pacific City is home to a dory fleet. We don't have a harbor, so the dories are basically backed up into the water and when they're done fishing, they just gun the boat to the shore and when it hits the sand it eventually stops. It is something to see.  You can tell when a lot of dories are out because they block off an area of the beach to let them get to shore without, um, running into anyone.

Here's a little video about our dory fleet.  We see these fisherman at the pub and at the grocery store. You can tell pretty quickly who is a fisherman. We also see people fish in sea kayaks (they catch cod for fish and chips at local restaurants).  It is quite the colorful place.
on March 01, 2019

Pretty pictures. I enjoyed the video - thanks for linking. I would love to be in an area where there is so much fresh seafood!!

Glad you're having better weather at the coast. LOVE that sunny, yellow cowl!

I'm glad you were able to get a respite from the snow. Enjoy your time at the coast house.

That view will never get tiresome -- for you or for me. It just looks like . . . rest. Have a wonderful weekend! XO

Beautiful view and I am glad it is such a haven for you!
Cowl looking great!
Neat article about the dorymen!

Who could get tired of that view?
And I wish we could cancel classes and not have to make them up!

I will show FIREMAN THE DORY information. He's going to find it interesting.