Busy, then more busy, then a whole bunch of busy

Yesterday was as you might guess, a busy day.

Up and at 'em
Here is one of the more challenging things about living in a small town: let's say you need something like a blu-ray player, or a weed whacker, or a bedspread. These are not things they have in the town's hardware or grocery store, and you haven't set up a post office box yet (no mail delivery here!) so you can't order via Amazon. This was us yesterday. So I knew I could get all of these things at the Fred Meyer in Tillamook. Fred Meyer (or Freddies) was originally an Oregon-based grocery change that expanded into a pseudo-Wal Mart type store, then got bought by Kroger. They are the closest 'big box' we have as all of the Big Box stores are in cities along the interstate and none are along the coast.

Tillamook is about 20 miles away but it is all twisty roads through tiny little farm towns, so it takes more than half an hour to get there. And the Fred Meyer is on the North end of town. It isn't my favorite trip--especially if you get caught behind a slow person (which inevitably happens). But I did it yesterday and got everything we needed, plus a big block of Tillamook cheese and pretty inexpensive coffee.

And in the afternoon
I revised the literature review of the 'revise and resubmit' so that's one task down. Then Tim and I bushwhacked across the street.

We bought the lot across from us in order to give us a much better view of the beach. We also know that the western edge of the lot ends at a canal that we could kayak on to access Nestucca Bay. The house is about 100 feet above the canal--or so--and it is pretty steep. We've only been maybe 1/3 of the way down the property. So we bushwhacked yesterday and got down very close to the bottom--there's a shear drop off there that will need a ladder or some such to get down. We found a few pretty cleared off paths--either the former owners put those in there before they put the lot on sale, or they are deer paths.

At some point, we'll take kayaks down to the bay, paddle them in, and hopefully build a little shelter at the bottom for them and be able to walk back up.

And then
We popped over to the Pelican for dinner, thinking this would be our best opportunity because Oregon Spring break is next week (yes, the whole state, including the state Universities). It was pretty busy by the time we left. 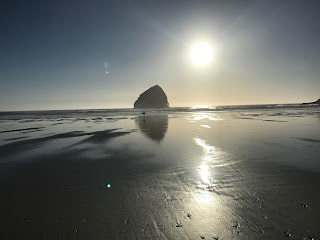 Followed by knitting on this: 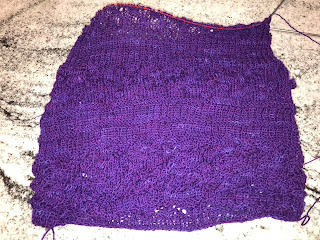 And then this morning we had this: 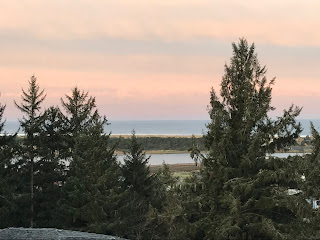 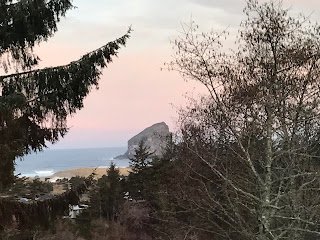 And here we are!

Have a great one!

I really dislike going to "big box" stores, but sounds like you have to out there! The sunrise pictures are so pretty. Enjoy your stay at the Coast!!

We have nothing by us and it's a 35-45 min drive to WalMart in one direction and an hour in two other directions! You get used to getting what you need when you are there and waiting otherwise.
The bushwhacking sounds labor intensive but oh-so-worth-it! Pretty cool.
Enjoy your break week!