Much on a Monday

We had a sunny weekend and now we'll have a few cloudy days here.  Sunny days are wonderful but even cloudy days are special here.

First off, some knitting 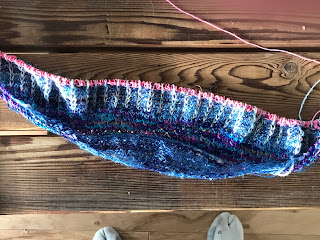 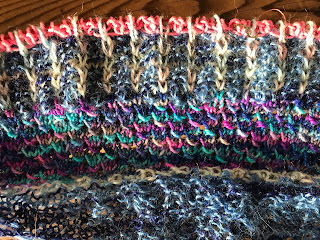 Video-ing
We watched "Mary, Queen of Scots" and pretty much realized we know nothing about the history of Scotland.

A few thoughts on the environment
We participated in the SOLVE beach cleanup on Saturday and I picked up (mostly) tiny tiny pieces of plastic.  I probably picked up several hundred of these: 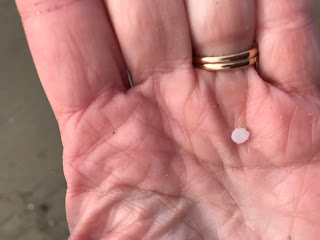 I was interested in reading this blog post from Mollie Makes about eco crafts. Usually things like this make me roll my eyes but I was especially interested in the eco-tape and the eco-glitter. There are calls here to ban glitter since it is essentially a micro-plastic like those little beads that were in face wash and such, so I was happy to see someone is making biodegradable glitter.  The tape is probably a good choice too-I'll look into it some more. And of course, we know that alpacas are good for the planet.

Reading
I just finished The Altruists (Amazon link) and it was good. It was about what happens when the glue holding your family together is gone. It was a fairly fast read and it was well written with a good sense of place (it was set in St. Louis, where I grew up, and it captured places in St. Louis very well).

This is finished and I'm ready to move on to the next one.  I'll be getting these pressed and framed and ready to hang. 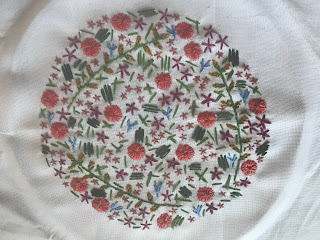 The 'new' neighborhood
Our neighborhood on the coast is called "Pacific City Heights" and is kind of the 'old' neighborhood up here (it consists primarily of seven streets that go north-south, one a bit higher than the other, and then some east/west streets that connect them all). The neighborhood was probably developed sometime in the 1980s. To the north of us is one new neighborhood that is being developed now--we call it 'Hawaii' because the two streets there have Hawaiian names. The other new neighborhood is to the south of us and for lack of a better word it is swanky. It has a very strict neighborhood covenant (no whimsical house decorations among other things) and it has gorgeous, gorgeous views. 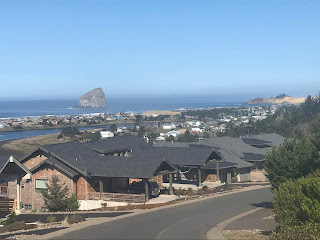 Very expansive vistas of the rock and the cape to the north, and to the bay to the south. But we still love our view the best. 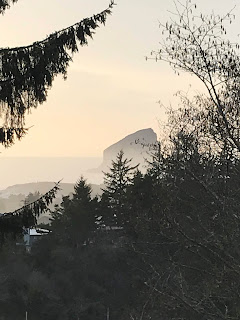 How affordable is Life with a View there? You know, for a middle-ager thinking about relocating. . . ;)

That stitched piece is just gorgeous! One you have "x number" finished and hanging, you MUST take a picture to share with all of us!

Hands down, your view is wonderful.

I love your view best, too!

If you see the ocean, it is a great view! Your stitching is superb-can't wait to see how you frame it.

Your view is all the swank I'd need. Your stitching, both embroidery & knit, is beautiful! I really like the color combo in your knitting.

Oh your stitching is AMAZING. That will be so beautiful displayed!!!