Random on a Tuesday

In no particular order 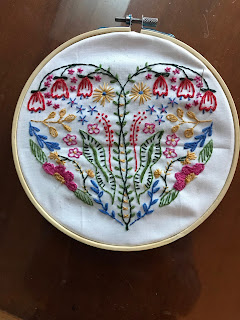 I need to iron this but I finished it and started another (much less detailed) one.

Books books books
All the Beautiful Strangers. It is about secrets (basically, aren't all books about secrets?) and how they impact a family. Set at a boarding school and a bit of going back and forth in time.
The Hunting Party was good but I put it down a lot (it may be more me and not the book).
That's Another Story  is Julie Walter's memoir (Mrs. Weasley, and Rita in "Educating Rita." It is a nice pick-up-and-put-down book.
Daisy Jones and the Six was written by the same woman who wrote The Seven Husbands of Evelyn Hugo  and it was kind of like a blend of "A Star is Born" and "Almost Famous" and there doesn't need to be that in this world.

I'm with you on the time change thing. Although it seems like I should love "falling back" better than "springing forward" (because I hate losing sleep. . . ) (even though I really don't) (but still), I always adjust quickly to the "springing forward." And I love the extra daylight at the end of the day! XO

I usually don't adjust well to the time change in the Spring, but this year it hasn't seemed to bother me. Your stitching is beautiful.

Oooh --- I didn't know Julie Walters had a memoir. Thanks for the heads up!

The stitched heart is pretty. Are you going to frame it or turn it into a cushion?