I started the Botanique shawl. It has 14 panels using 4 different colors. It reminds me of Fabulosity and as they are both Casapinka patterns that shouldn't be a surprised. I know I wasn't going to do four color things but I gave in. 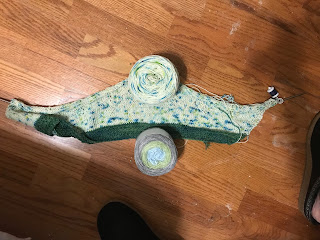 Only two colors here--a medium green and a speckled. The medium green has some green and blue mixed in although reads as olive here. The grey/green/blue is only serving as a weight but it will be used in this later. I also have a lighter green. 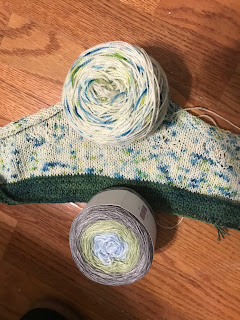 The pattern is a little wonky, with at least one chart where the symbols don't match the instructions, but that chart is a whiles away and so maybe an update will be given.

Beautiful day
Yesterday was in the high 60s and today in the 70s. Then rain and cooler starting Friday. I love the nice weather, believe me, but it is hard as a professor to teach. If you teach inside, students either skip or don't want to be there. I held my afternoon seminar outside yesterday, and while they enjoyed it, the students were distracted by bugs, wet grass, stuff falling off of trees, bugs--and these are grad students! Ah well. We often don't have nice days until the end of spring term, and it always feels like you are getting away with something when you have class outside.

Yesterday was also a day that I was--literally--interacting with people for ten hours straight. My interactions with students were good but with others were very tense. That is not fun.

I'm going to the farm this morning to visit the alpacas.

Mrs. Wilson
This is a 3-part series that aired recently on PBS. If you haven't seen it, you should. First, it starred Ruth Wilson, who I think is one of the best actresses today. And Iain Glenn, who is not shabby either. The story was based on a true story and it was fascinating.  A woman marries her boss during WW2 in the UK, but he is not who he seems to be.

Poem in your Pocket Day!
It is today, y'all! 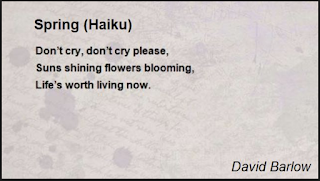 I enjoyed watching Mrs. Wilson - she was a smart and persistent woman.

I enjoyed Mrs. Wilson too. That is going to be a pretty shawl...what are your other colors?

I'm saving Mrs. Wilson until next week . . . as a special treat for myself while Tom is up north, opening the cabin. :-) And thanks so much for sharing the lovely haiku! (It fits right in my pocket.)

Did you know the Mrs. Wilson in the show was Ruth Wilson's actual grandmother?? I found that fascinating!

Oh boy. Ten hours of interaction is crazy pants. may you get some quiet time. I LOVE your shawl. Thanks for the wonky pattern warning, I'm afraid I'll have to steer clear.
You are a great instructor

Enjoy the farm! It will help you to relax and rest! The shawl should be a very good knit!
I will check out Mrs. Wilson!

Green is my favorite color - can't wait to see how your shawl progresses. It's going to be lovely!