Spoiler alert: not really anything to see here.

I may not love this project.

The cast on of 313 or so stitches was done with a picot cast on (I read further in the pattern that any cast on worked, so I could have done long tail, but I was already 2/3 into it by then). Basically, it takes seven stitches to add two stitches to a picot cast on (you use cable cast on to cast on four, and then bind off two, which involves seven stitches), so that took a long time. 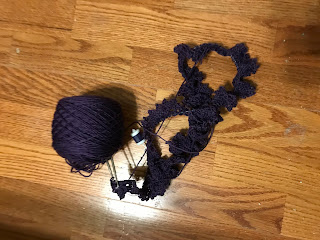 I started on the Kimono lace and can do one row in half an hour. 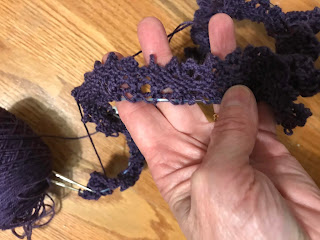 But my friend Deb gave me these. 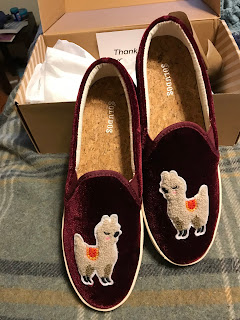 They crack me up.

The cast on is beautiful despite being so tedious. l love the slippers/shoes: they're a perfect gift for you.

The Kimono lace is stunning, but sounds sort of exhausting.

I think picot is worth the effort.
Adorable slippers.

LOVE the slippers! The lace work is gorgeous - it may be tedious and slow, but I think it will be worth it (of course, I'm not the one doing it...).

Ok, they are hands down your most perfect gift. I love those slippers
TINK cmon!!~ I can't wait

That lace will be worth it . . . once you're finished! And the picot edge is lovely. Those slippers are just adorable! What a sweet gift. :-)

OMG! Those slippers are adorable!!
313 stitches of picot cast on? You are a strong, strong woman!

Now that the cast on is finished-aren't you glad you did it?! The results are stunning. The house slippers are too fun!