I have so much to share! Where to begin? 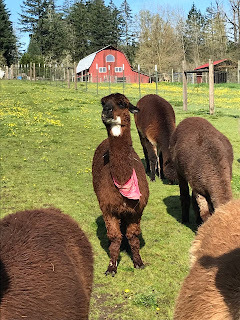 Tink is in a pink bandana, in the hopes she gives us a girl (honestly, as long as cria is healthy I'm good--but--Ann has had three boy births in the past several years and she is ready for a girl!). Tink seems to be good. 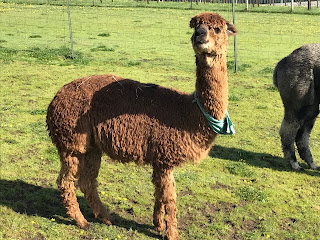 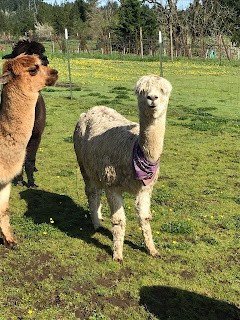 Marmalade in Purple! Marmalade is Kokopelli's sister and as a result is Calypso's Auntie.

I've been thinking of names--last night at the Symphony I came up with Freia for a girl (also thinking about Luna, or Luna Bell) and Loki or Blitzen for a boy.

Gift from the farm 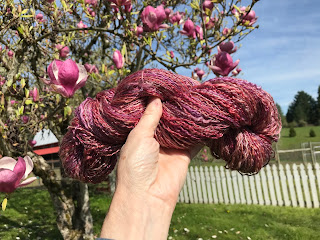 Ann spun this and then gave this to me, and it looks exactly like the plum tree in her front yard!!

Oh the boys
Tripoli, born last summer, was moved into a group with the 'gentle' boys. The boys had all been together until a recent event where one or two ganged up on Calypso. Ann had been planning on separating them anyway when she weaned Tripoli. Tripoli is a cutie fluffernutter: 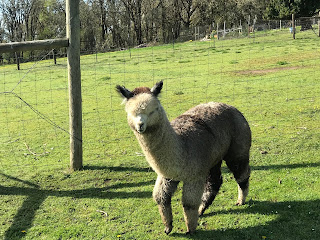 And he is friends with Calypso. 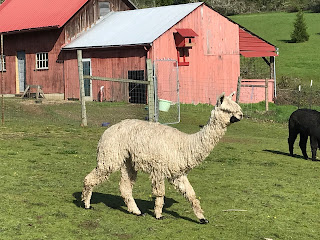 Who needs a haircut (next weekend!)

It was one of their 'conceptual' programs. The concept was "The Color of Light" and featured music by a composer named Scriabin, who believed every musical note depicts a specific color. There was a 'color orb' that was a giant ball of color that changed during the piece. But colors didn't change with every note--apparently in the first piece (Poem of Fire) he had written out what color each section represented. Here's a picture of the color orb in the rafters (it got lowered down for the performance): 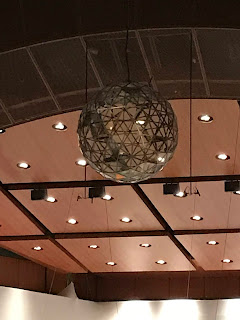 It was big. Probably give feet in diameter?

Tim really liked it. He may have a bit of synesthesia--his niece Jean has a little bit but I don't know if it runs in the family. I found it aggressive and kind of 'borg' like. 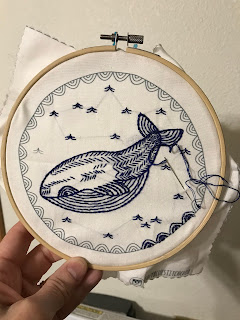 I went down a rabbit hole about embroidery on tulle the other day. I will add this to my 'summer experiment' list!

Thank you for the cute animal pictures!!!! They made my day. XO

Loving the whale and the farm photos. I desperately want an alpaca of my own.

Oh, those alpaca pics!!!! The concert sounds...interesting.
The embroidery is perfect!

Those alpacas are just so cute. It will be fun to see the new babies.
I just love the whale embroidery. Very classy!