OK so maybe I'm a little more than disappointed

I'm kind of sad that Tink 'slipped', as the alpaca people say. A year is such a long time to wait for another cria---assuming she's OK. I think I mentioned the vet will check her out on Thursday (and even sadder, he has to put down Marigold the Llama because she has such bad arthritis in her neck that she can no longer hold it up).

Yesterday was a busy day--class, and meetings, and the car needed service so that involved dropping it off at the mechanic's near school and walking back and forth to pick it up. There are all kinds of politics happening right now and that makes it tiring, to say the least.

But
Fabulosity is nearing the finishing line! 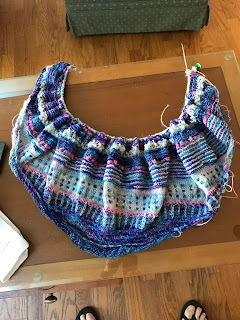 All that is left (and this is a big all) is 22 rows of the border, which seems to be a fairly straightforward border. 22 rows is a lot given the number of stitches on this, which has to be close to 450 now (yikes).

Books
I finished Isaac Mizrahi's memoir "I", it was OK.
I finished a Kindle freebie called "The Secrets You Keep" by Kate White, and even though I finished it on Saturday I'm searching my brain to figure out what it was about. OH--a woman spends the summer in Saratoga with her new husband and THINGS ARE NOT AS THEY SEEM and there are murders and secrets. It was OK.
I read "Truth and Beauty" by Ann Patchett which was a story of her long friendship with the poet/writer Lucy Grealy. It was---odd. I love Ann Patchett (well, maybe I just love "State of Wonder") but this was--uncomfortable.

Shake down cruises on the appliances
I've done several loads of laundry in the new washer and it is fine. It works. It doesn't turn on when it isn't supposed to. So that's good. But the new dishwasher is terrific. We did the first load last night and while it took a long, long time (our dish drawers did a load, a small load but a load, in an hour and a half. This took--maybe two and a half? We used the special drying feature, because for whatever reason having dry dishes is important to us. Anyway, the dishes are so clean and it makes me think our old dish drawer was really several years past its prime.

I'm trying to be environmentally much better. So we need to go to the air dry mode on our dishwasher. I'm glad you love your dishwasher!!!!
As for books, I'm not. But I bought a book for a baby shower sunday: The Night Before Christmas.

What a great result with the shawl-it is a real beauty!
And I think you knit it pretty quickly!

That's so sad about Marigold but I'm glad she won't be suffering.
I'm so torn with the dishwasher. It kills me to pay for the electricity to dry the dishes but I DESPISE pulling wet ones out.
Fabulosity is fabulous!!

Work sucks here, too, I'd love to blog about it, but I'd be fired.

Your fabulosity is so gorgeous!