We had a very rainy weekend here--

You may be thinking right now "It's OREGON it is supposed to rain here" but let me explain. Oregon rain is light. And intermittent. It's the kind of rain where you think "is it raining enough to pull up my parka hood, or should I just walk a bit faster to get where I am going?" It is not non-stop downpours that do not let up.

Except this weekend. It rained all weekend-no let up. Wet dogs after short walks rain.. Socks that never quite dry rain. Dull headaches rain.

So there was knitting and reading and movies, of course.

The linen One and Done is a good 'read and knit' knit. 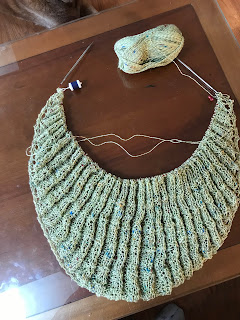 I also did some new embroidery, and a bit more on the Fabulosity.

I read two books this weekend. First up was an Amazon "First Reads" called The Overdue Life of Amy Byler. It was chick lit but not completely ridiculous chit lit. If you can get this one for free, I would not stop you from doing so.

The second one was crazy. It is called Neverworld Wake and I had read the two previous books from the author. She has an interesting way of seeing the world. Somehow I always get sucked into books about people at boarding schools where bad things happen, and this was sort of one of those. I really can't explain it, but if you like books that really twist the boundaries of what can be believed, try this book. Warning: it is crazy. But I liked it.

Movies
We watched "Green Book" and I get why it was controversial but the acting is really good. I didn't know which actor was Tony Lip and I was shocked that it was Viggo Mortensen. He could sit next to me on a plane and I would have no idea who he is.

Hope your weekend was dry and entertaining!
on April 07, 2019

Hope your week is dry-er than your weekend was! (It's always nice to just stay in and knit and read and watch movies. . . )

Tough to be rained upon the whole weekend! The knitting time is paying off-the shawl is gorgeous!

One and Done is spectacular!

Thanks for the book recommendation. I already had 1 on my Kindle and have added the other to my wish list. Hope things dry out for you. It rained here enough on Friday that they closed the park and I got an unexpected day off. Yay! Of course, I goofed off and accomplished nothing ... but it was still a very nice day off.

Oh Kim. That you new someone in The Day the World Came to Town meant so much especially at the end of the book. So so sorry.
I finished the book, I tried to publish a pattern, I kept my foot up and the swelling went down and it is moving nicely now.