Mondays are apparently for circles

It was a good weekend, not a lot on the agenda as Tim was finishing his dissertation (oh, that little job) that he sent to his committee last night. His defense is two weeks from today, hooray! He still has to put together his defense talk (45 minutes!) but the light is at the end of the tunnel.

This is how old I am: my defense talk was done on acetates and presented on an overhead projector.

Winding
Anyway, I felt so much better this weekend than in weekends past I did a lot of things I had meant to do, such as wind yarn. 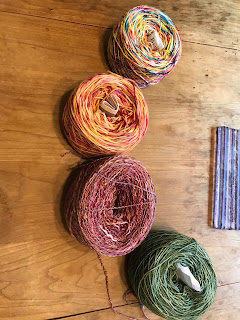 I'm nowhere close to finishing either of the two projects (and still have ends to weave in) but I'm already thinking ahead to new projects.  I'm not at home right now so I don't know who these yarns are. The top is speckled which I like. The second one looks like rhubarbs. The third is handspun from Ann, and the fourth is some Knit Picks that needs to be a cowl with trees on it.

Framing
I also framed all my little stitches. 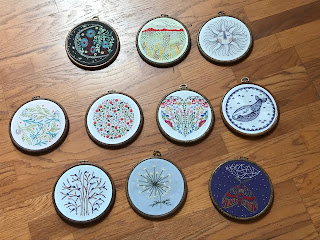 These hoops are rubber that is printed to look like wood. They work nicely, and have a somewhat-fancy closure thing on the top that screws in. We'll take these out to the coast and see where we want to put them this weekend.

Reading:
"The Mother  in Law" by Sally Hepworth (it was good---a murder occurs, there are four suspects, maybe five, and the ending is satisfying in a "Gift of the Magi" kind of a way.

I also read another Elin Hildebrand book. Her work is sort of chick-lit-y but her stories and characters are engaging, at least when I'm brain dead. I read "Nantucket Nights" and it was one of her early ones--no one has a cell phone! Or Internet!

Watching
We watched "First Man" on Saturday night. It was fine. I was kind of bored. Is it bad to say that space stuff kind of bores me?

Your "little stitches" are so lovely. I wish I could do embroidery!
(I can hear the yarn in my stash crying out in pain as I say this. NO. Don't LEAVE us...)

Your little stitching projects are so charming, all collected together like that! Best wishes to Tim as he enters the "countdown phase" of the dissertation process. (I typed Tom's dissertation on an IBM Selectric typewriter, and helped him draw his chemical structures by hand with drafting tools!!!! Oh, how times change.) And, yeah. First Man was pretty dull. XO

I'm sure you are ready to get to knitting with all of the pretty yarn cakes calling to you!
The stitched circles are going to be a beautiful accent on the wall in the coast house! Great job making them! (the frames are perfect!)

The stitched circles are lovely and will look fabulous in the coast house when you get them up.
I am finally up to date with your news. And sorry that you had such an awful time of it at the university recently. How scary!
There are alpacas at a little children's farm about 10 miles away. I went with Frankie, L and Kpip last summer. Really engaging animals.
Thanks for commenting!

The hoops and stitchery will make a nice grouping on the wall. (Is it just my eye, or is the whale upside down?) How exciting for Tim to see the end of his hard work in sight. Glad your weekend was a good one.