A good day in Eugene

Today was a stormy day (hello climate change--we lived here for 19 years without any thunderstorms and now they are becoming frequent). Pilot doesn't like them, Comet and Jessie cat ignore them. 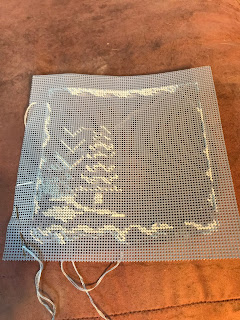 This is done in whites and blues and I think will be nice. You can already see the first two of the four  (maybe?) trees.

The eye doctor
I had my annual eye doctor appointment today. My eye doctor is a sort-of friend--she's a woman about my age and we've had some great conversations about small business marketing. I really like her a lot, but it takes FOREVER to have an annual exam for a few reasons. First, she has all kinds of crazy machines that look at your eyes, and that takes a while to collect the data, and for her to analyze it. Second is that we have to have a quick 'catch up on life' and that ads ten minutes or so into the appointment. Third is that the person who orders contacts and glasses is wacky (in a good way) and fun to chat with.  Then I went to the grocery to pick up some things that aren't usually available at the Chester's grocery in Pacific City (I'm looking at you, shallots).

And this happened.
Our neighborhood grocery store is part of a chain and is the smallest store in the chain. I'd describe it as a bit more upscale than the Safeway but not as pretentious as Whole Foods. It gets an interesting mix of college students, neighbors that are kind of like me, hippies, and parents visiting students.

And today, in line behind me (and it was basically me and these people in line), were Sam Elliott and Katharine Ross.

I had heard that they have a ranch in a small town north of Eugene, but I have no idea why they were at my grocery store. I wanted to say something to them but all I could think to say was "My twinster Kim is pretty much your biggest fan on the planet and she is going to freak when she hears you are behind me in line" but instead I just smiled at them and they smiled back. Katharine Ross has a terrific smile. And just hearing Sam Elliott speak is music. 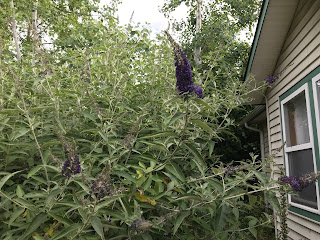 Our vet went to check on Tink yesterday, and he drew some blood for some tests, but thinks she should be fine to breed. He suggested to Ann that she put Tink and Kokopelli in a pen together for a week and to just let nature take its course. Apparently nature has taken its course several times, so hopefully this will take.

Back to the beach

Jessie the cat is going to the vet in the morning and I have a phone call at 11, then I'm heading back out to the coast, assuming all is well with Jessie. It is kind of weird to be 'visiting' here but this is the summer to figure things out.

I always think it's so fun but weird to spot a celebrity - it's surprising because they are out of context! Those are two good ones to spot, that's for sure.

I think it's kind of nice that your eye dr is someone that you are so friendly with - it's nice these days not to be rushed in and out in order to meet quotas. I hope Jessie gets a clean bill of health.

I went to the eye dr. on Tuesday and had pretty much the same experience. Life catch up (it had been 3 years!), crazy futuristic machines, and a quirky but very nice guy that makes the glasses. I really wanted transitions lenses but have to wait until the new, improved ones are available July 10th. And Sam Elliott!I'm afraid I would have asked him too many questions just to hear him speak.

Oh gosh, I would have swooned! I do love Sam Elliot. Sending good vibes for Jessie. Nice stitching - the blue and white should be pretty for the holidays. We recently switched eye doctors because the one we had been going to took FOREVER to get you in and out. Folks were scheduled too close together, and sometimes you could show up for your appointment and have to wait over an hour! But, nice that you two are friends and all that.

I think celebrities like it when people don't make a fuss, so I'm sure your smile made them happy. I do love Sam Elliot's voice!

Every time I have one of those chance encounters with someone famous (once I sat across the aisle on an airplane from Carlos Santana!), I just sit there like an idiot and SAY NOTHING. How fun to see Stars . . . right in your own grocery store! (And my dental hygienist is like your eye doctor! We've known each other a long time, and my appointments last a long time . . . because catching up.) XO

OMG! You didn't lead with the Sam Elliot story??? He is my #1 TV boyfriend and I just melt when I hear him speak. I am SO stinking jealous! But then, I'd have been drooling on him and totally embarrassed myself to the point I'd have to break up with him so maybe it's for the best he wasn't at my grocery store. :)

The white on white work is going to be amazing!
I think 'famous' people like your kind of greeting best-gushing wears out quickly! Maybe you will see them again!