With Tim done with his dissertation, and graduation ceremonies complete, we finally had an entire weekend to, well, have a weekend! It was great, busy, fun, relaxing.

We are trying to find a small bed side table or dresser for the guest room, so we travelled to a few estate sales and a furniture store til we found one workable (not good, but workable) at the Habitat for Humanity ReStore in Lincoln City. We had a great lunch at a brew pub there, and also brought this beauty home: 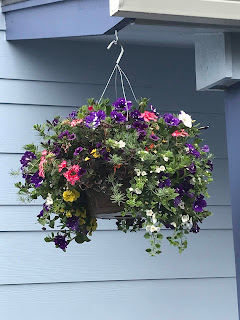 We had thought about having it on a planter (not hanging) but we decided we didn't buy that for a deer snack.

Hiking
We walk a lot here, and yesterday did a new hike at a state natural area called Sitka Sedge. It was about three miles around a wetlands and out to the beach. 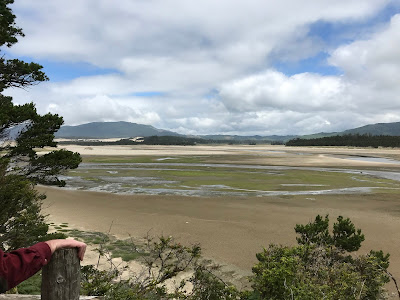 The tide was out. 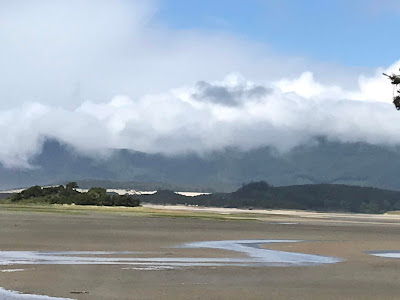 This is a photo of fog rolling over the inappropriately named Cape Lookout. 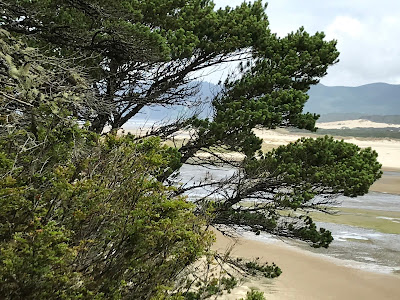 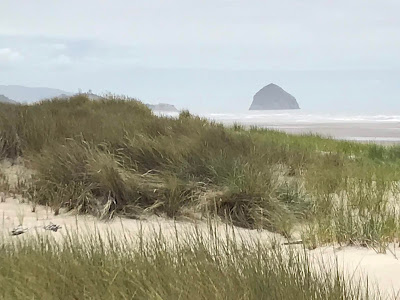 And finally---the beach, and our rock from a different direction.

Aquiline is done, and is blocking. It will need an ironing but I don't have an iron here. 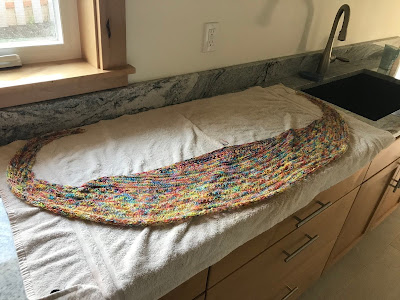 This yarn is so soft.
It has a fairly simple picot bindoff that is sort of unpronounced (hence it needs ironing). The colors are so cheerful! I'll take another photo in the sun later.

In other news
The political situation--ugh. Republican senators walked out of a vote on cap and trade to address climate change in Oregon, so there's not a quorum to vote. The governor ordered State Troopers to go out and 'round them up'. This is not the first time this has happened in state legislatures, and it is not just Republicans that act like spoiled children in this way. This has got to stop, and I appreciate efforts to bring the poisonous discourse in line.

Ravelry took their own steps to address this (banning hate speech, which they have described as any pro-Trump messaging) and are now facing the inevitable slings and arrows from this decision.

Let's end with a sunset. 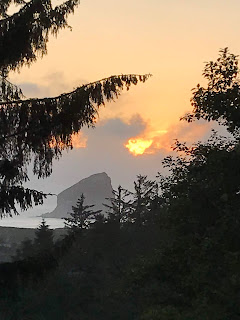 In 2011, all the Democrats in the Wisconsin State Senate fled to Illinois to avoid a vote on Act 10, which took away most union rights. It was a nice gesture, but eventually they had to come back. And the same will happen in Oregon.

I have a very different view of the Ravelry BANNING; they can moderate their site as always but banning any Pro-Trump sentiment?! Have we come to the place in our country where we are AFRAID to hear civil differences of opinion.
Wow. I don't not agree with the philosophy of the lesbian/gay lifestyle but I would never spout hate to anyone of that mindset-I have to have it front and center on Ravelry but I just ignore the feature articles about it-THAT IS HOW WE RESPECT FREEDOM OF SPEACH! That is how we respect other individuals. Ravelry is a knitting community-how much more equal if they banned all political speach instead of just the ones they didn't agree with. Now that is childish.