And here we go

It's the start of finals week--it begins with meetings and student presentations (my masters students) from today through Wednesday, then a party Wednesday afternoon at the alpaca farm. Tim's graduation is Saturday, mine is Sunday. And in between, I need to get things organized to head out to the coast.

We're still trying to figure out the balance--Jessie Cat will stay here, because she is destructive, and one of us will probably come into Eugene each week, but we have a good (and flexible!) pet sitter so that should work out OK.

I think I'm on the second-to-last section and I should double down and just try to finish this during the week, but we'll see. At least I won't have to tote out all four skeins if I don't get it finished. 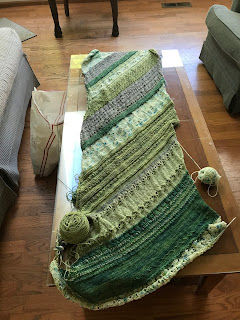 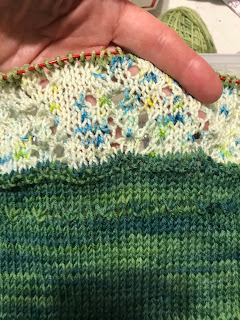 There was yardwork, there was finishing dissertations (Tim), there was grading (me), there was hanging out on the deck and watching Tim cook (obviously me). He did our first 'smoke' of the year and made ribs and chicken, so we're set with food for the week.

I finished "City of Girls" by Elizabeth Gilbert. It was good, especially the first half. It is getting a lot of raves, and I'm not sure it is that well deserved of raves, but it kept my attention to the end. I didn't zip through that much.

Not much else to report--I've been working on a new little stitches and I also bought some plastic bin organizers because I'm doing too many crafts! And I need to keep them organized. So I feel a bit more organized now, which basically means I've dumped all my embroidery stuff into a little bin. Little victories.
on June 10, 2019

Your shawl is coming along so nicely - love it. And, you are almost there (end of term). Smoked ribs and chicken sounds wonderful (as I stare at my container of raw veggies for lunch). Hope the week goes well for you.

End of term is a frantic time and mentally exhausting. I hope things go smoothly this week.

Oh such a fun finishing week!~
staying organized with my yarn, patterns, and needles could be better. I would say I reorganize about 4 times a month

Soon you will be settled; it will make all the difference in the world!

You have a long semester!
If only I could fit all my embroidery stuff into one bin. I have been embroidering since I was 12 or so. That's my excuse.
I continue to love your shawl.