Doing all the things

The to-do list
Finished a few things on the list and it was enough so I could feel my brain switching off from working all the time. That's a good feeling!

Citron
I've been wanting to knit Citron for a while and cast on for it the other day (I only had two projects going! That isn't enough!). I also unearthed (while packing) a skein of yarn that is somewhat watermelon colored. It is a cotton (not my favorite) made up of multiple strands of yarn (not my favorite either) but Citron is pretty straightforward and it seems to be going OK. 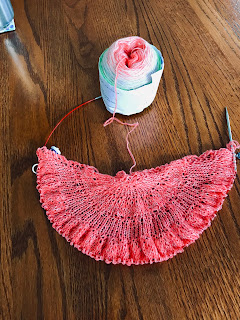 Weather Report
Yesterday would be sunny one minute and cloudy the next, with a shower thrown in here or there. Tim just called out 'it's raining' and I guess that is summer on the coast! I'll take it. It was just cool enough last night for a little fire. 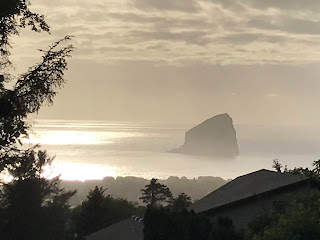 The Neighbors
Yesterday I was coming home from the grocery store and as I turned onto our street I was greeted by a number of swifts, two ground squirrels, and a bunny sitting right in the middle of the street, unwilling to move. There are eight deer that are roaming our area--one of the families down the hill feeds them (oh well). This guy was trotting up our driveway as we drove in from our anniversary dinner last night. 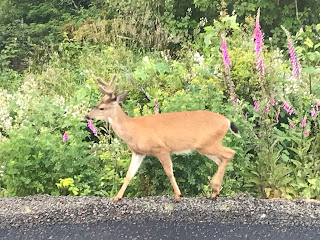 The neighbors' garbage cans all have bungee cords because bears. I still haven't seen a bear but I'd like to--from a long distance.

Anniversary dinner
We finally had our anniversary dinner last night at the River House, probably the nicest restaurant in Pacific City (don't laugh! There are probably ten restaurants: The River House, two pubs, a dive bar, a mexican restaurant, an asian restaurant, two bakery/sandwhch shops, a breakfast place, a pizza place that we never have gone to, and the Fancy Hotel with High Prices and Small Portions (we haven't gone there either. OK that's 11. Anyway, we went to the River House which is mostly fish and all the fish comes fresh off the Pacific City dory fleet. We shared the following things: Crab Bisque, Calamari, Crab Ravioli, and Rock Fish and Chips. And then had truffles for dessert.

It was absolutely perfect.

Oh yum - that anniversary dinner sounds delicious!! I can't make up my mind about Citron - let us know what you think.

Reading along, loving what was going on (particularly the skein for Citron), then get to the description of your meal

I hate you now.

Oh I am so happy for you!!!! Be careful of the deer and bears. The deer cause many issues here in the countryside of Wisconsin. WE have WHISTLES on our grill that I insisted we buy , that are supposed to deter the deer. No one can hear them but the deer. The guy at auto parts laughed said some believe in it some don't. Id rather try!

Let the summer begin! You have nice country views to savor!

Oooh! I love the color you're starting Citron out with. It's going to be lovely! As for the bears, we have them too. It's pretty cool to see them.... except when you are home alone, sitting on the deck late night/early morning and you suddenly see glowing eyes staring at you from the woods.... And you run inside and become ridiculously terrified that the giant bear is going to magically squeeze his big butt through the dog door in an attempt to eat you... :)