The Last Day of June

June is over, and this has been a busy one for us--Tim's defense and graduation, the end of term, moving out here--but it did seem that June lasted a long time. I hope the summer lasts as long!

Lead with the knitting!

The only thing I've been knitting on consistently is Citron, and it is growing! 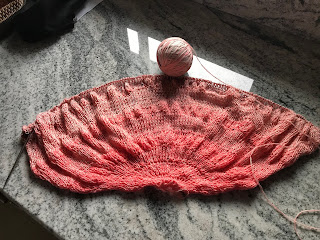 This is kind of a fun knit--it is straightforward knits and purls, and some crazy increases and decreases (on every first row of a pattern repeat, you increase in every stitch! And then you decrease them all in row seven, creating the little ruffley bit). I like it. The yarn seems to be working well too.

Cooking
I don't really cook fancy things, and I'm not a great cook by any means (that would be Tim), but I did spend much of Friday making this: 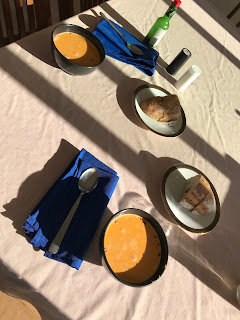 It's crab bisque--from scratch---served on a weirdly angled table at sunset (I really don't know what I was doing here when I took this photo).  Tim made sourdough (yes, Mandy the Sourdough Starter is here at the coast with us).

The only thing I didn't do was catch and clean the guts out of the crabs--I made the stock from scratch. It turned out very well and I think the stock needed to be a bit stronger. But I was very pleased that I made something that didn't suck.

Visitors
There is a gang of four guys that come and hang out every so often. Here's the leader. 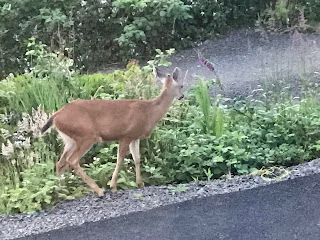 Other entertainment
Last night we watched "Old Man and a Gun" with Robert Redford which was fine (not great, but not violent and not disturbing, so a good calm movie) (about a bank robber).

I'm reading a really interesting book called "Magic for Liars". It is interesting. The premise is sort of along the lines of "what if Kinsey Milhone investigated a murder at Hogwarts" and there you go. A teacher at a school of magic is murdered and a PI named Ivy goes to investigate--she is hired because her twin is a teacher at the school. Anyway--it is good and there are lots of suspects and the title comes from the fact (I think) that Ivy, who does not have magical powers, suggests that she does have them in order to get to the bottom of the case. Or she might be an unreliable narrator, I'm not sure. Anyway, it might be a fun read for summer if you like things like that (note: the magic school is nothing, physically, like Hogwarts, and students take things like English and physics.

Let's end with a sunset.
As one does. We've had some amazing ones this week. 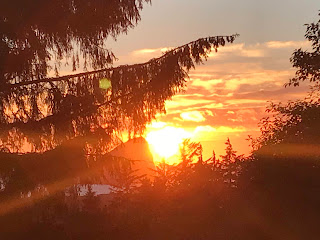 Oh, and I'm watching "Dickensian" now; thanks for the recommendation!

Good stuff! I tried to pick a favorite, but every one of these is great!

All good things. I really liked "Old Man and a Gun." Gorgeous sunset.

Beautiful sunset! I like the shawl--very pretty with all of that ruffly texture! Sounds like a good summer read!

Citrons are so lovely. But, I didn't enjoy the knitting because you knit all those stitches, and then cut back. I got frustrated and ended mine too soon. It would be fine for a doll or a toddler!

I can't do a citron. I"Ve tried and tried. I m going to ADORE yours from a distance. and oh, thanks for that amazing sunset

Kim! I don't know how you haven't been on my radar, but you are now (and on my Bloglines reading list)! I met my husband while living in Tillamook and he was finishing building a house at Cape Kiwanda -- we eventually got married in that house. I'm sure you've seen it!! We were out there a few years ago and visited the surprising number of places we lived out there in a very short time. Anyway, the house is in the second-to-last photo in this post: https://www.knitorious.life/2016/03/i-went-to-oregon-part-3.html (we didn't have a fence). It's all changed SO MUCH since we lived there (moved to WI at the end of 1986). I love looking at your views! ;)

I'm so far behind on blog reading! The book sounds interesting & I'm adding it to my list. Your shawl is looks great, but I already knew that because I'm apparently not catching up on blog reading in the proper order. Yikes! :)