A crafty catch up

I'm writing this on Saturday morning as the fog is burning off and the blue sky is peaking through. It has been a cloudy/drizzly week here on the coast--rain on Monday and Tuesday, and then clouds for the rest of the week. I had a moment yesterday when I thought 'where has the sun been?' which is an odd thought, since when we're out here in the winter we can go for quite the stretch without seeing the sun. Anyway, the sun looks like it will make an appearance today and the plan is to do a kayak trip on the bay. We haven't kayaked for two years (yikes, what happened to last year? Oh yes, we were building a house and Tim was writing a dissertation) so hopefully we won't be that out of shape. 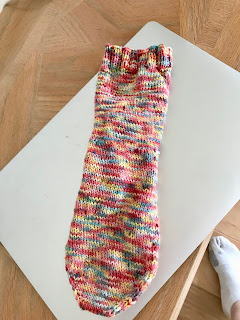 It's a plain vanilla sock in cheery colors that don't really show up here.

And the woven thing 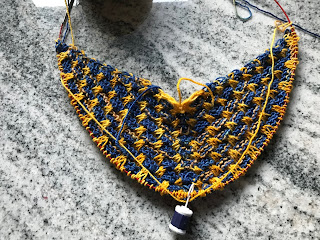 This is actually a very, very fun knit. It's Knit Weave and it is meant to be a cowl but I'm thinking about making it more of a shawl size and not a cowl. I'm using two colors--one is the gold one, and one is blue with shots of gold in it (Ravenclaw colored sock, maybe, I think from BMFA?) and that isn't exactly optimal (two solid colors would be optimal) but I like how it is looking now.  So we'll see what happens. It is a slip stitch pattern with a six row repeat that is easy to memorize, so stay tuned. I think I really wouldn't wear it that much as a cowl, with that giant point on it, but I would wear it as a shawly thing. 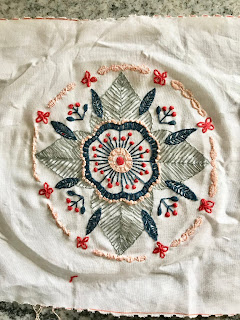 I'm not thrilled with the satin stitch, as doing it in a small space got it all tight, but here is one more mandala (not in the frame, so it looks messy).

I started another one immediately. I'll take this one (and another few finished ones) back to Eugene (I'm bopping over there on Monday with a list of errands to run) and iron them and plop them in the frames.

This was the last one I did before the stupid Fiskars punch broke. 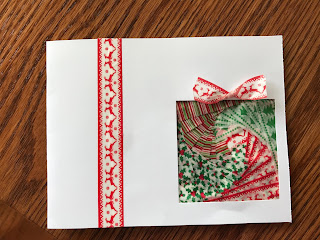 I kind of upped my game on this one, though.

I got another set of washi tape and this is my first experiment with the new tape.

And blame it on Carole.

Carole mentioned she ordered a Cricut and that was interesting timing because I've been shopping around for something to cut paper for cards. The punches are fine but I can't have them breaking all the time (apparently Fiskars punches are know to just stop working, and they even have a very simple to fill out online form when they do break so they can be replaced. Um). I had been looking at a few Cricut machines (both manual and computerized) and also a few competitors. I was leaning toward a Cricut manual machine (the Cuttlebug) which, as Carole mentioned, has a nice sale on now. However, the Cuttlebug with just a few dies is just a bit less than a bluetooth computerized machine, such as the Cricut Air Explore and the Silhouette Cameo.

I'm a bit intimidated by the design software, but I pulled the trigger on a Silhouette Cameo 3 which should be here next week. There are lots of comparisons on these two machines but I think the Cricut was able to do a lot more things than I really needed it to do, so simpler is better perhaps.

I think when I realized how cute a card could be really made me think that card making is something I'd like to do a lot more of. And I have the space out here to do it (not sure where I would store this all in Eugene, but maybe this becomes a 'coast' craft and not a Eugene craft, because I have a lot of more portable crafts. 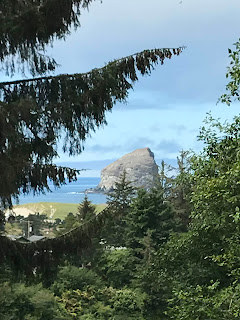 Uh-oh. If Tim thinks it would be very cool, he may horn in on your craft time.

Beautiful shot of your rock! I would never tired of that view.

Go for it!!! You will find yourself working on that software in no time!
The KnitWeave is amazing!!! Can't wait to see it continue to grow.
the sock is so cheerful is right!

Ack! I'm so jealous! I'm dying for one of those cutting machines, although I have no idea what I'd do with it. No idea at all. But I desperately want one.
All of your stitching is lovely!

I admire that stitchery!!!! So pretty.
and I love your rock shots