Somehow, now, our weekends are so full and fun. I guess part of that (ok most of that) is due to the fact that Tim no longer has to spend weekends working on the dissertation. And we tend to get up pretty early here, even on the weekends, as we just feel rested and ready to go.

Saturday
Saturday was,  as you've seen, the Dory Days parade. Tim had to leave the parade a bit early to meet up with a logger to give us a bid on taking out more trees. I met them both back home, and we had an interesting chat.

He came with what I call a 'box of dogs'--his six Treeing Walker Coonhounds. He (the logger, his name is Dave) has a contract with some government group to track and tag cougars on the coast. And so the dogs do that with him (I'm guessing that this breed is primarily bred for hunting, and I'm not a fan of hunting, but apparently Dave's dogs were trained to focus on cougars). Anyway, he showed us pictures of the cougars (and some bobcats) that they've treed--that is, chase up a tree. And then Dave and his partner tranquilize and tag the cougar, and then the cougar wakes up and goes on its merry way.

Anyway, a box of dogs that I got to love on.

Then we made a pasta lunch and hung out on the deck a while (minimal breeze--it tends to get very breezy here sometime in the afternoon, and it held off on Saturday til later in the day). Then we did some chores around the house, and watched some TV later in the day (we're watching a Netflix competition show about glass blowing. I think it might be called Blown Away? It's fun).

Plus two dog walks, and sitting out on the deck to watch the sunset.

We slept in (7:30!), had breakfast, and then popped over to the boat launch to launch the kayaks for a paddle in the Nestucca River (the river opens into Nestucca Bay which opens into the ocean, so it is a tidal river). We probably did a 2-3 mile paddle (round trip) and took out before the breeze picked up. Then home to walk the dogs and then showered and went to Beach Wok for lunch (town was emptying out pretty quickly in the morning).  Then we did more work around the house and hung out.

And another dog walk. 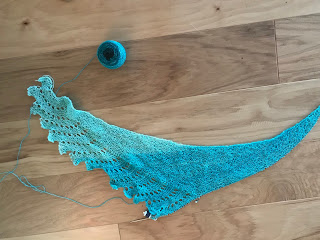 A few more waves done on Close to You. 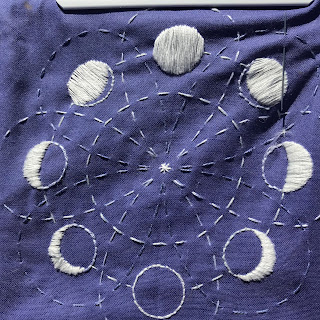 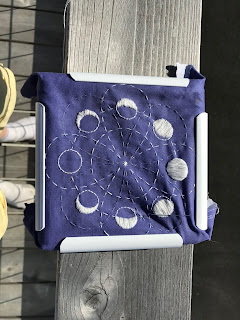 Tiny needle phases of the moon.

Just FYI, I"m not crazy about the Q Snap frame. The 6" one doesn't show the whole pattern for me, and now I'm using an 8" one for a new project and it is OK but not great. I may go back to a hoop.

I'll just leave you with this. 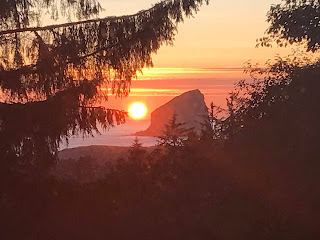 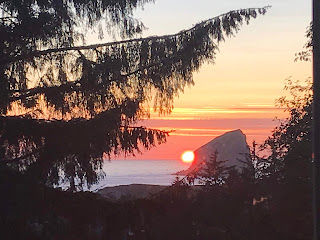 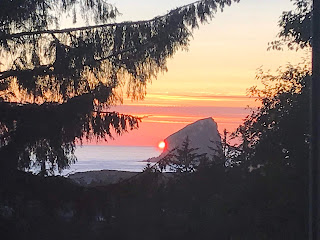 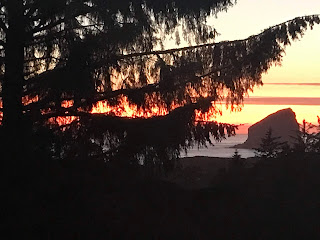 I shall never tire of the ROCK!
Sounds like you had a good weekend!! Yeah!

saturday was the dreaded move out of Zach's apartment. I hated it. That place was just sad. Zach had a horrible year there and going there with no Bear kitty just stuck. BUT ITS OVER!!!!

He's up here now for a month at least.

I didn't get to knit much and boy do I get crabby pants.

I think you and i should do a swap . Just us. Theme?

Gorgeous sunset photos! When I embroidered I preferred a hoop to keep my work taut.

Very interesting about the logger also having dogs to track the cougars/bobcats! The shawl is making a beautiful transition! I think I would agree on the bulkiness of the Q-snap frame not being a favorite. I turn the small hoop every which way to stitch and I can imagine the larger frame would discourage that! Agreed-we never tire of sunsets on the rock! lol

When I did that type of embroidery, I used a wooden hoop. Doing cross stitch on linen, I prefer to stitch with my fabric in hand. If I'm going to do pulled or cut work, then I would use a hoop.

AWESOME sunset! :-)
It's amazing how much time and energy and brain-space a dissertation will suck up, non? So glad you're feeling so free-and-easy now that that particular monkey is off Tim's back.
(And when I do embroidery, I need a really tight surface. Hoops are IT for me!)

I'm blown away that a dog could be trained to only track cougars.
Not to be a backseat stitcher, but it looks like your fabric isn't in the frame straight or anywhere near tight enough. I think you'd like it a lot more if you refasten the one on the right side. You can also sort of twist the outer part of the frame towards the back to tighten up the fabric while you are stitching. With or without the frame though, your embroidery looks great! I love that design and your shawl is looking fantastic too!

I just tried this plastic hoop for the first time and liked it. It was tough to get the fabric in it, but it is tighter than wooden hoops, which I constantly had to adjust. https://www.amazon.com/Hoop-14401-008-Embroidery-8-Inch-Color/dp/B000GBT9FA