Thanks for your positive thoughts about Jessie. She is now ensconced in her 'suite' downstairs--she is going to be spending her time in the 'office' downstairs where Tim works and where we can easily watch Amazon or Netflix if we want to spend more time with her. She seems good--the car ride was not awful, with minimal vocalizing over the 2+ hour trip, and then the rest of the day Tuesday she pretty much hid in her crate. But now she is out, eating and drinking, happy to see us and the dogs, and we feel we did a good thing bringing her out here. It does feel a little more like 'home' with all the animals here.

I did some work on the woven shawl (which I have decided will be a shawl, at least until I run out of yarn): 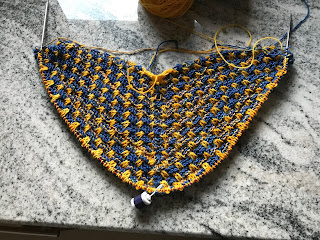 This is still pretty small--maybe two feet across--so it will be an ongoing project. It is almost 'mindless knitting' with a six row repeat and once you get the pattern down it is very intuitive. 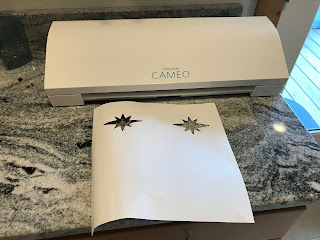 I don't like to call things 'game changers' because that should be for things like, oh I don't know, penicillin and bluetooth, but the Cameo is a game changer, at least in my life of paper cutting.  Here's a picture of it (it is maybe 16" wide?) and also two cuts that I made.

Here is the first thing I did (after a basic circle): 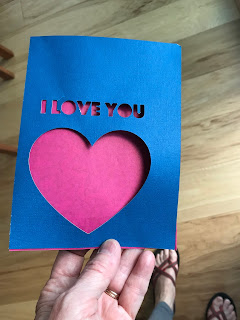 It's not centered, but look at that clean clean heart cut! 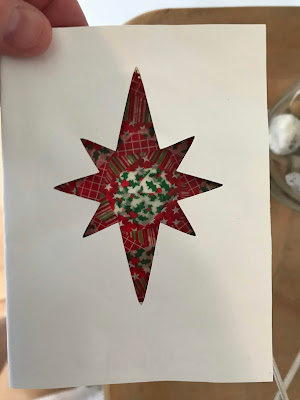 Here is a card I made with the star cuts from the first photo, using iris folding.

Then I made one with some metallic washi tape, this will be a Christmas ornament when I add the little topper. The metallic is kind of hard to see but I do like the circle. 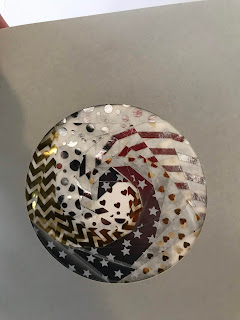 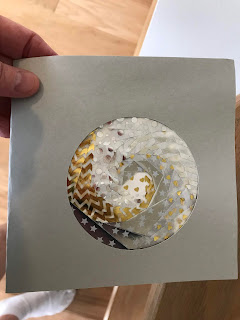 I cut out a few other shapes yesterday, and I'm really liking this machine. You can also get pens to put in it so you can write on the cards too.  I now know how scrapbookers end up with all their 'stuff' as there is more 'stuff' I want to get (spray on adhesive, I'm looking at you) but I need to be very mindful that I really don't need another stash going on.

I liked "The Bookish Life of Nina Hill" by Abbi Waxmann a lot--I guess you could call it Chick Lit but the main character has a severe case of anxiety so I can really relate to that. Nina Hill is an introvert who tightly controls every aspect of her life--until she learns here Dad (whom she never knew) has died, and she has a whole passel of new family members. It's not a far fetched premise and it is much better than most 'meet cute' books.

I also read "The Body in Question" by Jill Ciment and it was good too--a quick and engaging read.  The first part of the book is about a woman who is serving on a jury-she is only referred to by her jury number. The trial is a horrible murder trial. She starts an affair with one of the other jurors (she's married to an older, ill man). The characters are well drawn, even without names, and the story is really compelling and somewhat heartbreaking on a lot of levels.

I know a lot of you are suffering under a 'heat dome'. Yesterday we had sideways blowing rain for most of the day. It was winter-miserable. Today is nice. As was the sunset two days ago. 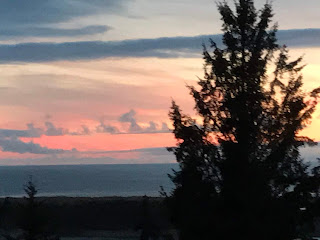 Your shawl is gorgeous. So glad Jessie made it out ok and is settling in. I'm sure everyone will be happier!!

I'm not even looking at your cutter gadget. I definitely do NOT need another hobby and another stash!

Love your coastal sunsets - so pretty.

The ornament is gorgeous. I can see why the game has changed.

I'm so happy for you to have this great paper cutting tool! You will put it to good use! (as we see the results already!)

Look at that sunset. WOW. Jury duty....yup. I'll be spending my birthday week serving in our county! i don't mind. Getting called to Chicago jury duty was my deepest fear. The neighborhood was awful. The crimes were horrible. I'm so glad to serve here in a tiny town!

Good news about Jessie! You are going to love the paper cutter: the new cards are quite lovely.

Oh wow! I LOVE those metallic circles. Your shawl is awesome too. Love those colors together. But those circles... I can't wait to hear about all the things you do with your new toy. I'm desperate to get one but have absolutely no use for it.