The body of Citron is done and now I have to do All The Math to figure out how to finish it out. 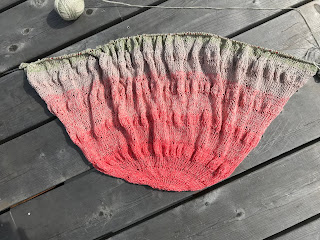 According to the pattern, I have 11 rows left, plus a bind off. I have 27 grams of yarn left. The next row I need to knit is the first row of a ruffle (where every stitch kfb) so I will know how much it takes to knit that row when I measure after it is completed. Then I'll have a good idea  if I can knit the whole 11 rows plus bind off (row 7 is a decrease row).

I can knit a narrower ruffle, or knit fewer rows after the ruffle, so I'm not that worried. Yet.

Did you have a nice 4th? The dogs did OK--Pilot had a serious dose of Puppy Xanax and then for whatever reason wanted to hang out in the car in the garage. We hung out with him for a bit and then ventured out to watch the fireworks and he was just fine. The fireworks were great--the 'official' ones lasted less than half an hour, but there were probably two hours of 'triple illegal' ones that lasted til 11:30 or so (there were fireworks on the beach --illegal thing one---that shot up in the air ---illegal thing two--that had to be purchased outside of Oregon and it is illegal to shoot off fireworks that were not purchased in Oregon--illegal thing three). But it was much less stressful for us because of how relatively calm Pilot was.

Probably only one or two more nights of random stuff, hopefully, and then back to normal.

Your shawl looks beautiful Kim!
I think our country pals will be shooting off fireworks all weekend! No doubt in my mind!

I hope you work out the math and the yarn amounts! It can be a bit of stress to get it to come together but it sure is pretty so hang in there!!!!
Glad the fireworks didn't have a harsh ending! We had enough rain lately that it wasn't banned here which has happened in the past! (then people let loose with gun shots into the air which is an altogether different kind of...wow!)

Wow! That shawl knit up quickly! Hope you win the yarn chicken game.
Sounds like you had a nice 4th! Glad Pilot did too. :)

Gorgeous, gorgeous colors. If you ever make a poor choice colorwise, it will be front page stuff.

As for playing chicken, I usually knit really, really fast. Sometimes it works.

Tap did very well with the fireworks here. Like there, we had official displays, then lots more from our neighbors.

Kim I have a new survey up if you wish to take it!