I'm in Eugene--got here yesterday morning, did a gazillion errands, and now will clean up the house and pack up the car and head back to the coast. We'll be back for a week or so a week from tomorrow. 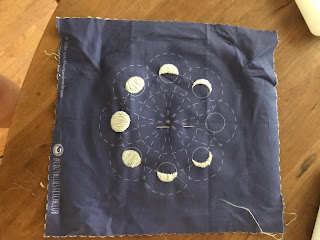 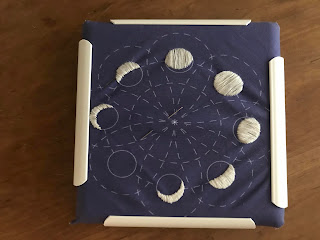 This is a phases of the moon pattern by Cozy Blue which of course I love. The thread in the moons is kind of a silver blue and have some darker colors in that same range that Ill use on the rest of it.

You may have noticed I'm using a QSnap frame. I just figured out this morning how exactly to use this so I am making no judgements as of yet. The 6 inch frame doesn't look like it shows the whole pattern but I think the next size--8 inch--is going to be a bit too big. We'll see.

Tuesday Busy-ness
I left the coast around 8am and got to Eugene around 10:15 (I drove the speed limit through the 'back' roads--I forgot to tell you all I got pulled over last week by a State Trooper who gave me a warning and now I'm being mindful of my speed. Plus, he told me the reason to drive the speed limit was because it was safer with all the elk and deer running into the road. I can do that). Anyway, first stop was PetsMart, where things for Jessie were purchased.  Even though she will not have free reign of the coast house, I think she will be happier as we will spend a lot of time with her there. She has been pretty glued to me since I walked in the door.

Then home to dump the stuff I bought, then to school to sign my final retirement letter. I may have mentioned that the way my University works is that you give them quite a bit of advance notice (up to three years) and they give you a little pay bump for your last years. Then, I can choose to teach part-time for up to five years but I'm not sure what I'll do then.  I chatted with some people in the building but it is pretty empty as construction is going on.

There was a little gift waiting for me from one of our doctoral students: 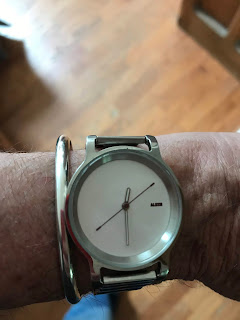 It is a beautiful silver bracelet, and inside is engraved with "Alis volat propriis" or "She Flies with Her Own Wings"--the Oregon State motto. I think it is one of the best state mottos ever (here are the ones from places I've lived):

-Missouri:Let the welfare of the people be the supreme law
-Illinois: State sovereignty, national union
-Massachusetts: By the sword we seek peace, but peace only under liberty
-Tennessee: Agriculture and Commerce


Then a quick trip to the grocery store for biscotti, which we can't get on the coast (oh, there's a lot more stuff we can't get, but since we'll be back next week it isn't that big of a deal).

Then home to measure the yard for mulch to get blown in, then scheduling that for next week.

Then scheduling an annual exam for Pilot.

Then out to the farm! Ann had left a charger at our house so I brought that out to her, and then saw the kiddos, but took pictures of Calypso and Tripoli. 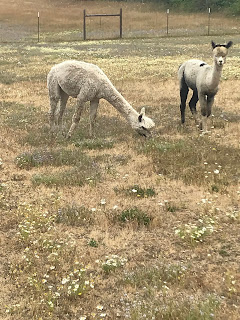 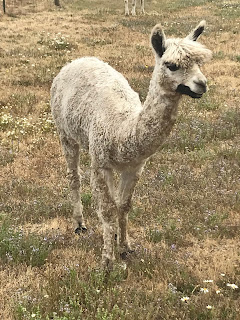 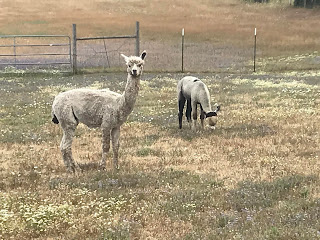 Then, off to get new glasses (they were waiting for me, along with contacts). Then to a nearby Michael's for a few craft things (my new cutting machine has arrived! Hoorah!).

And THEN (yes, the day continues), I dropped by Deb and Dan's to visit their dogs. They have a pet sitter as they are doing field work in Alaska, and Deb loves and misses her dogs so much (I can relate!). So I spent some time with the dogs and their pet sitter, Rachel, and that was nice.


Then home to weed whack.

And then I just kind of melted and watched a Law and Order marathon.

This morning I'll clean the house up and then head back to the coast with Jessie. Wish us luck!
on July 16, 2019

The bracelet is beautiful as is the Oregon motto. Hope all goes well with Jessie

And, yes, deep sigh for Tennessee.

I've never used a QSnap frame, but I think the 8-inch will be too big. The reason I say that is, I use a 7-inch hoop while I'm working on Cozy Blue's kits, and then switch to 6-inch for display. (This is what the woman behind Cozy Blue does herself!) I don't feel like there's enough extra fabric to accommodate an 8-inch hoop, and I assume the square would be the same. It's too bad the QSnap doesn't seem to come in 7-inch!

Oh my goodness. I don't know how you do it all! WOW. Hooray for someday retirement

I've seen large Q-snap frames but not one so small-do let us know how you like it. Beautiful bracelet--enjoy a few days of rest.

Lovely post, Kim. It was interesting reading the state mottoes. I know very little really, about the different states.
I liked New Hampshire's 'Live free or die' although maybe it was the cradle of the Revolution so I'm not too sure (haha).
Oregon's is certainly the most poetic so it gets my vote too.
Love the stitching!