Wrapping up a great weekend!

It's the middle of the afternoon Sunday, and we've weekended very muchly.

Tim brought the kayaks out on Tuesday, and we got them in the bay Saturday afternoon. It was great, it was just like we had paddled a week ago (and not two years!).  We were on a mission--the land we own across the street ends at a canal that empties into Nestucca Bay, and our goal is to be able to launch the kayaks from there. However, our forays across the street and on to the steep, steep hill have been challenging--we run into a very steep drop about halfway down, and then there is a small creek like thing that we are not sure about crossing. So anyway--yesterday our mission was to paddle to the bottom of the property on the canal, and then check it out from there.

Well, that went OK-ish--Tim managed to get out of his kayak and scramble up the bank, while I stayed in the water and held on to the boats. He walked around a bit and reported the grass in some places was taller than he was. So our hopes of a pre-existing gentle slope with a manicured trail down to a lovely boathouse was smashed (ok, we never really had that hope but we can dream, right)?

But it was a great paddle, through the bay's canals as it was a bit breezy on the bay itself, but we have great plans to do some early morning kayaks when the weather allows (it tends to get quite breezy in the afternoons).

The closest put-in is a 4 minute drive, and easy-peasy to navigate, so we are eager to do more kayaking on the bay.

We took the dogs on a several mile walk on the beach this morning. 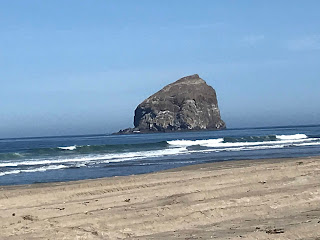 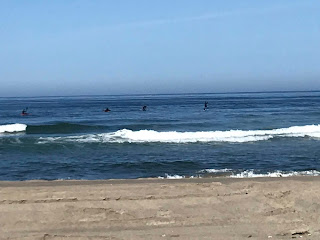 In the water were surfers, stand up paddleboarders out in the surf, and surf kayakers. In the air were little planes doing a quick landing and take off at our little airport. The dogs were happy. The shells were plentiful. It was a great beach walk. Pilot was especially happy because there was a trail ride that passed us, and Pilot loves horses. He didn't stop barking for 15 minutes.

And the rest of it

Yardwork, washing the car, breaking down boxes, walks, and hanging out. Very nice.

I decided I needed to knit something out of this sea-like yarn: 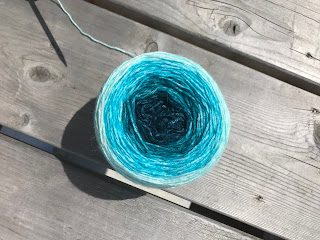 I started in last night on Time Stops at Shamli and after over two hours had this much done: 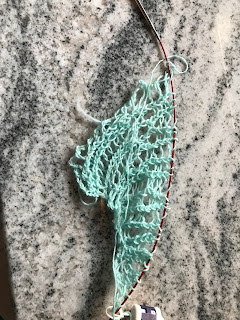 I don't even remember how many times I started over. This is a lace pattern that isn't complex, per se, but there's no wiggle room in it. And people say it is easy! It isn't! So I was awake in the middle of the night, fretting over it (silly me) and decided to frog it and try something more straightforward.

I decided on Close to you and I'm much happier. 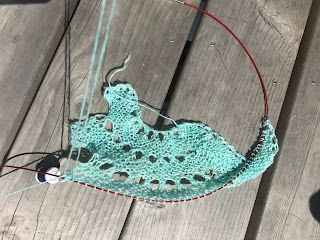 I'm headed to Eugene in the morning for a quick trip to run a few errands (new glasses and contacts, measure yard and order mulch, sign retirement letter, visit the alpacas) and to bring Jessie Cat out to the coast. She's fine, but we feel so bad about leaving her alone for this time (we have a cat sitter, but it's not the same). So I'll also stock up on Feliway tomorrow. Stay tuned to see how that transition goes (she'll live downstairs only, as she is destructive, and Tim set up a type of cattery for her). 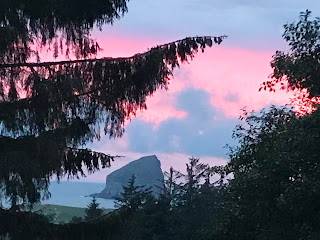 Fingers crossed that Jessie settles in and likes her new digs! Your weekend sounds relaxing and productive, too.

Sounds like good adventures! I would want to dig switch backs down that bank...
Hope your cat settles in-I would hate to leave her behind, too.

I notice you put the "sign retirement letter" in amongst all the other errands --- are you downplaying a bit?

That last pic is gorgeous. Oh I hope Jessie the cat is ok and happier with you. I wonder why she is so destructive? A trail ride on the beach sounds so nice - I would love that. And then Pilot could bark at me - lol.