Anemones, dories, a big old rock, an FO, and other Tuesday treasures

Yesterday was a good day. It stayed cloudy til early afternoon but was then pretty breezy, but that's I think pretty normal for August (it is very cloudy again this morning).

It's early--the only thing I can hear are the waves, the birds, and a little rustling of a gentle ocean breeze. And the tapping of dog feet on the deck.

After coffee, the dogs and I went down to Cape Kiwanda and the beach. My original plan was to park at the brewpub parking lot at Cape Kiwanda (where it is IMPOSSIBLE to park on the weekends) and walk south along the beach. However, when we got there, the beach was pretty much empty. The ocean was incredibly calm, and it was about an hour before a very very low tide. There were some surfers out a bit south of the lot but it was not a good surfing day. So I decided that the dogs and I would partway up the dune. 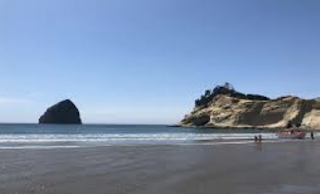 This photo is from All Trails so you can see the rock and the cape--the larger Dune is not in the picture. The dogs and I climbed up the cape at the far right side of this photo.

I was wearing flip flops which are not the best choice for this climb, but I perservered. This is the view from lower part of the sand dune. 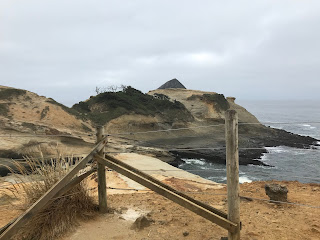 That's the top of the rock you can see peeking up.

I was the only up there, save for a couple that climbed through the "Danger do not enter" fence to go further out on the Dune (we've been out there a time or two, but before they put up the danger fence. People go out there all the time though. It is---dangerous. Easy to slip and fall. Sometimes the Coast Guard take a helicopter and go yell at people. There is talk about putting a 'safe' path in but people are people and it seems once people get to the beach, no rules apply). (Fireworks, I'm looking at you). Anyway, it was a lovely time up there.

The dogs love it because of the smells.

Then, because it was such a low tide, we walked around the tide pool area. 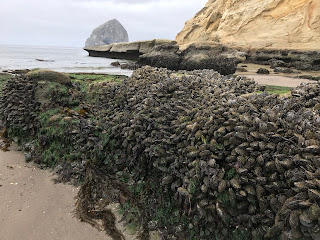 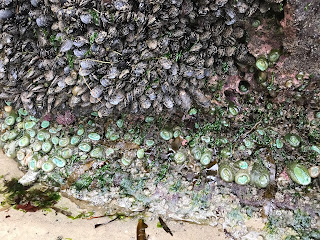 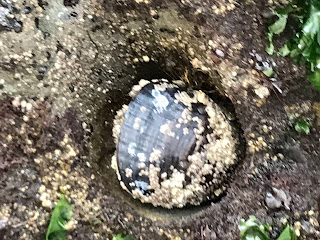 A clam stuck in a little hole on a rock. 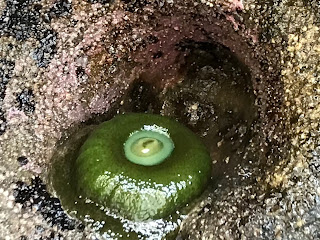 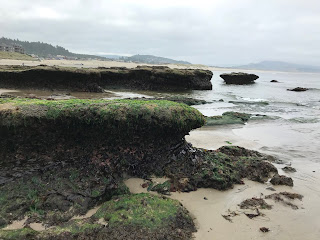 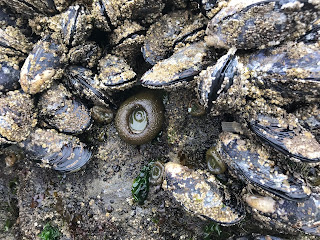 Then we came home and I had an hour long conversation with my oldest friend Platt in New York.

Switching gears--my Cameo will let me take the cutting blade out and put pens in! So I can write on cards! This is genius although the pens aren't that great. But I played around with that anyway-- 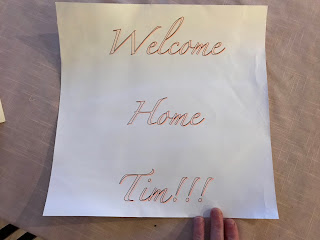 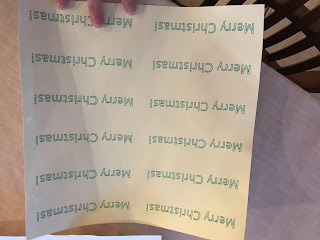 These I'll cut out and put in Christmas cards.

But of course, now I can print messages in the cards themselves! So cool!

This really deserves its own post, because it's an FO, but here is the "Close to You" scarf. 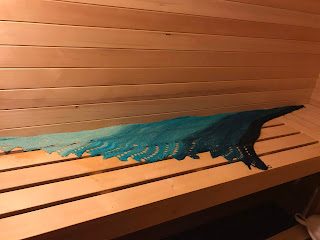 When it dries I"ll take it out in the sun and photograph it again.

And I soaked the new Tiny Needle Piece to see if the stuff that I had printed on and then stitched through would come out. I truly expected it not to come out because I'm cynical about that kind of thing, but guess what? About three minutes of soaking and it had all dissolved! What a time for you! The beach time looks so inviting! Nice job on the shawl!
I am plugging away at mine!! This gives me a good incentive.

What a wonderful flip-flop hike! Thanks so much for sharing it. :-) I love the Close To You shawl pattern. It's a fun and surprisingly quick knit -- and it looks just great! XO

Jealous of all around you. Would love to hear a shouting Coast Guardperson.

That does look like a great hike (I might have taken off the flip flops and just been barefoot). Loved the pic of the anemone and the video of the dory! Fun! And, of course, your stitching and knitting. Beautiful.

Aack! Your embroidery piece makes me want to turn on the Christmas music and I love the colors in your Close to You. Beautiful beach photos! So very, very different from southern, east coast beaches.