Lest you think it is all blue skies and rainbows here--

Here was the sunset last night: 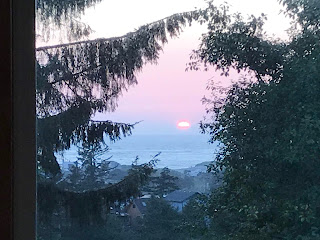 and here is the same view this morning-- 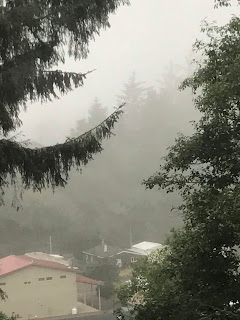 OK not exactly the same but you get the idea.

It's beginning to look a lot 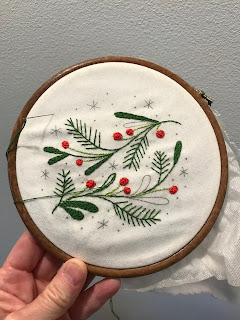 This is almost done--it is one of Cozy Blue's free downloads that I transferred. I love this. I also have a box with a few of her Christmas kits that I'm saving to open. I was busy yesterday and toward the end of the day I almost opened for a little surprise but ended up just working on this one instead.

You were busy Kim? What were you doing?

We walked about three miles in the morning, and then I spent the rest of the morning working on a 'conditional acceptance'. I had some good publication news last week (and it ALWAYS, for me, comes in groups). First, the paper I wrote about Miss Piggy and Hello Kitty got conditionally accepted (more on this below), a paper I submitted to a conference with my former PhD student Alec won 'best division paper' at the conference (which is GREAT for him, he of untenured status) and ANOTHER paper I wrote with Alec (Alec did most of the work on both of these, FYI) got accepted to another conference AND because it was a 'top six' paper, it gets published in a small journal with NO ADDITIONAL REVIEW! Plus the piece I wrote for "The Conversation" has passed from Editor 1 to Editor 2. And then goes to Copy Editor. All the Editors for 700 words.

So anyway---the Miss Piggy paper (which asked the very, very important academic question--are Miss PIggy and Hello Kitty good spokespeople for high end make up and handbags) had two rounds of review, and then came the conditional acceptance with a list of 27 (!!!) things that needed to be changed before final acceptance. Plus,  the references all needed reformatting. The vast majority were things like 'add a sentence here' or 'delete a table and put some of the information in the text' but there was also a request to add two more articles to the lit reveiw (one written by the editor, so yeah) and two or three other things that took a bit more time. So I worked on those in the morning and got them all pretty much done. It did take close to three hours.

The first part of the afternoon was spent reorganizing the craft room. The room has both cabinets and drawers, and it was all a bit 'freestyle' but I had some thoughts on the drive out how to make it better and now it is better. I can see the supplies much more easily, which will hopefully keep me from overstocking (especially on card stuff).

I spent the latter part of the afternoon reading a book called "Black Nowhere" which was a Kindle Unlimited or a 99cent thing and I gave it up about halfway through because I just didn't care about anything in it. It should have been interesting--an FBI agent trying to track down the person that runs a site selling illegal drugs on the dark web, while a cartel is tracking him down as well. But the characters were not that interesting, and there were indications that there was going to be some violence that I didn't want to read, so I just gave up.

Then I worked on the needlework while cruising around the cable channels. I watched a bit of "Phil Spector" because Al Pacino and Helen Mirren and while it was certainly interesting watching Helen Mirren recite David Mamet dialogue, it just didn't hold me.

Playing with the die cut machine, farmers market, walks and I'm sure something else.

Have a lovely Sunday!

I have never done embroidery nor been interested in learning it, but the things you have been showing on this blog are wonderful. I really find myself being attracted to the idea of doing these. Please, I don't need another craft; I have knitting projects planned (and yarn bought) to fill another 50 years (and I am 72).

But don't stop showing your work; it is lovely.

Ugh, "publish or perish." But you seem to have a knack for choosing topics and co-authors.

Working on getting my Sunday in gear --- will try to have a good one.

Thanks for recommending The Great Hack: it was well done and interesting.

well it sounded like a lot of work.....rework, on those publications but I guess that is par for the course?
Glad you didn't make yourself finish a boring book. Your fog scenery looks like spring fog here. Sometimes when Fog rolls across a meadow here, it is just lovely