A little storm blew through yesterday, and it rained/misted/drizzled from about 11am on. It was a reminder of what winter will be like, but it is nice to have the sun coming back out today as the clouds burn off.

Our little back yard seemed very happy, as there has been very little rain here this summer and it is looking a bit brown back there. It was so wintery that Tim made a fire last night (we 'sort of' needed it, in the way that you need to warm up when you don't close windows on kind of a chilly day). It was nice.

In the middle of the day, in the middle of the rain, Dave the Stinging Insect Guy and Mrs. Dave came by to remove a hornets nest from the hill going down to the canal. Tim had tried to kill it but it was in/under a log, and we needed to bring the Big Guns in. Dave took care of it.

I have spent a lot of time yesterday and Tuesday working on this, because I just want it finished: 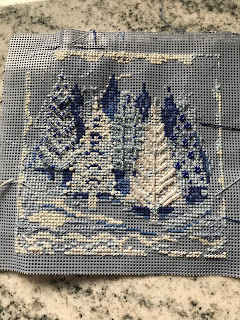 I've been focusing on getting the beadwork finished, and had to rip out one of the trees and then re-do it (ok fine), but I am liking how it looks. It actually photographs better than it looks close up.

Although here is a close up of the beads. 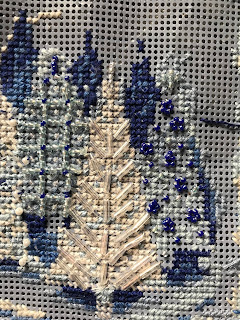 I like the beads, but I'm not sure if I would have actually done this if I knew how many beads there were.

I also made chili (I think I had alluded to that earlier) so it was wintery all around.

I'm dreaming of sitting around a fire outside and having winter meals. Meanwhile it is around 90 here again and humid and sticky. Yuck!

I would rather stitch the wintry scene than have it be so; you skipped Fall!

We're having a "winter" day today. Can you call it winter if it's 80? After weeks of upper 90's, today's rain and high of 80 definitely feels like a change in the season.

LOVE your trees! I love how textured they are and the beads make such a big difference.