This was our last summer weekend and we're now down to our last few summer days at the coast house. I go back to school really late, but things are starting up this Friday.

Last kayak
We did a new paddle, paddling 'up' the Little Nestucca, one of two Nestucca rivers that empty into Nestucca bay (the other is the 'big' Nestucca, which we've paddled several times). The Little was good--it goes through farmlands, and also in the river were several other kayakers, fishers in little solo pontoon boats, and (the best part) several seals (or maybe sea lions). Their little seal heads popped up every so often (one head was not so little, making me a little nervous) but they are fun companions to see during a paddle.

It was sunny, so I took a few more pictures of the shawl. 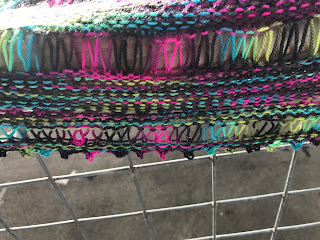 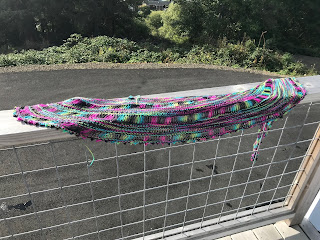 Neighborly
Our neighbors Dawn and Lane had us over for Moscow Mules (as one does), Tim made bread. Our neighbor Pam was there too. It was fun to hang out and get to know them, and we feel a bit more part of the neighborhood as well. Next summer I have plans to be much more integrated, and we may have a book club too.

Sunday
Sunday was extremely rainy (as this week is supposed to be) and we mostly hung out around the house (two walks were taken, though).

I did a little paper crafting, making this 'box ornament' with a tiny pop up scene inside. Now that I know how it all is supposed to work, I'm going to make a few more today. 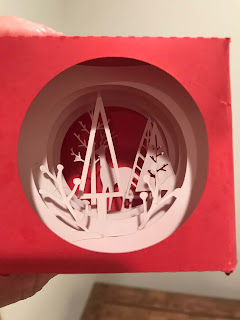 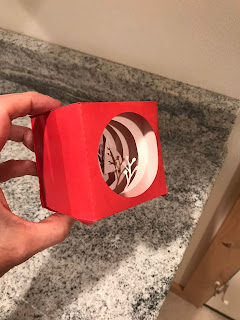 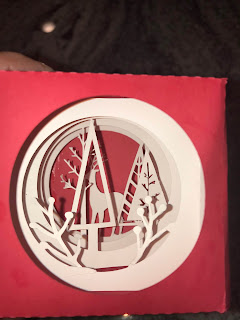 And move the deer up closer.

I also am working on another little embroidery piece--this one reminds me of a kaleidoscope. 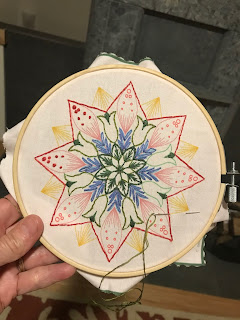 Fish and Chips
Still enjoying the catch--Tim made fried fish and I made chips for dinner. 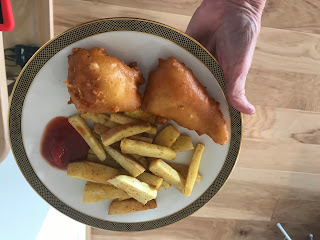 Wow, the ornament looks great and so delicate. Picot edgings are tedious but look fabulous: I love your shawl.

The ornament is stunning. Stunning, I say.

If there were ears, they were sea lions. If not, seals. (You're welcome.)

I think it would so awesome to have little seal heads popping up near the kayak! Every once in a while, a loon will surface near my kayak on the lake. So surprising -- and so cool! It's always bittersweet at the end of a wonderful summer season. I'm so glad you enjoyed your long summer at the beach house! XO

Oh, yum! How exciting to see the box ornament--really interesting to keep looking at the details!
Nice job on the shawl.

You have been busy!

The box ornaments are amazing - I can't even begin to think how they are made.

Wow! kayaking with sea lions would make me extremely nervous. A cool experience, but extremely nerve wracking. Love the paper box scene and that embroidery. It's going to be gorgeous!

Tim made bread. Now that three word sentence made me jealous!

So pleased you saw the seals ~ they are such delightful animals. I went on a boat trip to see them at Blakeney Point, Norfolk, one November. This is the largest seal colony in the UK. There were hundreds of them and some, swimming, came right up to our boat. We were freezing cold ~ but oh! it was worth it!