A weekend of making

It was showery and cool this weekend, which was nice, especially for crafting. I think I worked on every ongoing project, and got out some yarn for an upcoming one but did not allow myself to cast on until something else had been finished (plus there's some winding needed).

Cowl and reading
Silver Spring cowl is my go-to Knit and Read project. 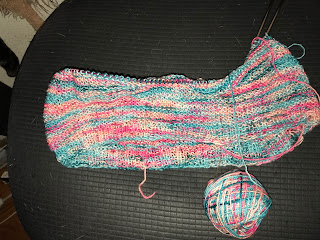 I'm almost to the last inch of rib, based on the amount of yarn that appears to be left. This is a bright and happy yarn, I wish I remembered whose!

I finished "The Dutch House" which was very good--in my Ann Patchett scale it was not as good as State of Wonder but better than Commonwealth. It got a little rushed at the end, but by then I was ready for it to be done. Wonderful, wonderful characters that you would just like to spend time with (except for Andrea, of course).

I also read (and almost finished) The Verdict or as Amazon describes it, a must read gripping crime thriller. It's gripping--it's one of those that goes back and forth in time and a smart reader KNOWS there's something that is not being disclosed and when that thing is disclosed it is a big WHOMP. I'm not yet done but I'm guessing there is something else that is not disclosed as well.

This is a bit of an experiment to see if I can stitch on tulle. 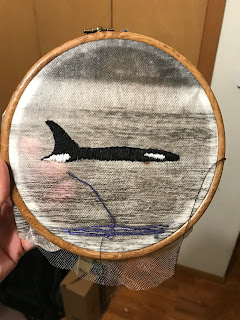 A friend to this photo during a trip to Alaska. I transferred it (in b/w) onto dissolvable paper and stuck it on a piece of tulle. Now I'll stitch it (the orca is done, and now I will use a few different colors of blue for waves in the ocean. Once it is done, it will kind of 'float'. Or else it will fall apart. Stay tuned!

Here is the planned mix of colors for the next big project: 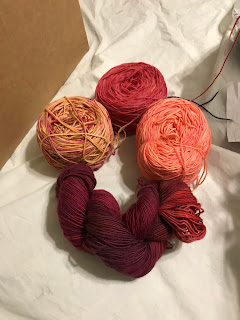 I switched out my closet.

We're watching Season 4 of "Billions" and just watched the episode called "The Overton Window" and I had never heard of that concept and now it fascinates me.

Brilliant work on the orca!

LOVE YOUR NEW COLOR COMBO so much! Love your orca. Great job KIM

I'm almost finished with The Dutch House -- and, like you, really enjoying it. (Down with Andrea!) I can't wait to see the Orca-on-Tulle finished. I'll bet it's going to be fabulous!

It sure will be interesting to see if the tulle experiment works! We're watching! The cowl is very pretty; the new project colors are very inviting! Enjoy!

Your colour choice is wonderful. I would say it looks fabulously 'autumnal'. What adjective would you use for 'Fall'?

The new batch of fall colors are gorgeous! Can't wait to see what you knit with them. I'm also anxiously awaiting the whale results. What a fun project!