We're at that time when we are starting to think of the 'lasts' of the summer. Yesterday was the 'last' summer Friday we'll be here (we head back to live--mostly--in Eugene this coming Thursday). Yesterday was our last trip to the dump for a while (ok that's not a bad thing) and with the threat of bad weather, this might have been the last morning for coffee on the deck.

We can feel the weather changing and we're so happy we had the summer here. We'll be back on and off in the fall, and for an extended time at Christmas, but we've been here for THOSE so it won't be like this summer, which was all new  experiences all summer long.

Pug face
We have a hand held vacuum for a long time that somehow earned the name of Pugsley (there may have been a pug involved in the packaging? I just don't remember). So yesterday I made a new pug face for it: 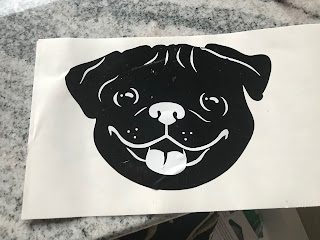 Clearly I need to go back to work. 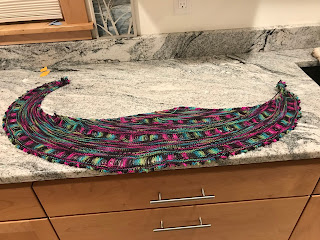 This needs blocking, and I'll show you it again when it is blocked. I used the 'easy' picot bind off and I'll take a close up of that too.

Kathy had asked what a sneaker wave is. It is a wave that does not behave like other waves do, which basically roll up on the beach and then roll back from whence they came. Instead of coming straight on the beach like regular waves, sneaker waves come up from the side, and they tend to go much higher up on the beach than regular waves. And move faster too. If you're on a flat beach at the edge of the tide then they don't make a lot of difference to you, but if you're standing in the water or on a rock or log near the water they can knock you off and then suck you out to sea. Every summer there is news of people who get trapped in a sneaker waves and need rescuing; sometimes they don't survive.

They're dangerous, or they can be dangerous, and there are certain weather conditions which make sneaker waves more likely.  The one thing that you are to do is never turn your back on the ocean, so you can see one coming and get out of the way.  People who get in trouble are often on a rock or a log with their back to the ocean and it all quickly goes bad.

So there is a LOT of science missing in that explanation, but there you go.
on September 14, 2019

I went to the Addams Family son when I read "Pugsley." Make of that what you will.

I thought of the Addams Family, too, when you mentioned Pugsley. I'm glad you had a wonderful summer in your coast house. You haven't mentioned Jessie, so I assume she had a good summer there as well.

Great minds must think alike because I instantly thought of the Adams Family also. Love the shawl. That yarn was perfect for it!

Lots of happy memories of your Summer! Hope you have lovely Autumn (you say 'Fall') and trips to the beach house when you can.
Thanks for the item on 'sneaker waves'. I didn't know. It's very true though ~ the sea is beautiful but it can't be trusted.

The lasts of summer is sad but you have a good year ahead to look forward to also. The shawl looks amazing already!

I also thought of the Addams Family - lol. Thanks for the explanation of a sneaker wave...I had assumed it was one that would sneak up on you, but appreciate the bigger explanation. Scary!!