Somehow I thought Friday was the first day of fall (Autumn to Rosy) but it isn't, tomorrow is. So happy Fall eve (Autumn Eve to Rosy).

Knit/weave has to be one of the slowest projects. After slogging along, and deciding I wanted to make a shawl rather than a cowl, I realized it wasn't really ever going to be a shawl, and I quickly pivoted and made it into a cowl and finished it. 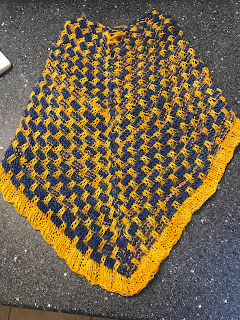 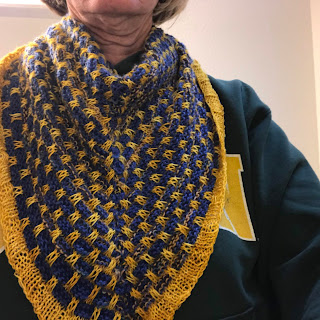 There are two yarns--a  yellow one and a blue with shots of yellow in it, and I like how it looks but in truth it might have looked better with two solid colors. And it looks a bit bibby but maybe with a turtleneck (which I think I need because my neck scares me) it would be cute.

Otherwise
We took two long walks yesterday as it was a lovely day (today=rainy) and also Comet has a vet check up (she's doing GREAT! She also completely freaks out at the vet but yesterday she did really well. 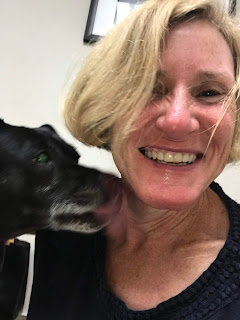 She's blurry because she is so busy licking me.

And this kind of cracks me up. There are always 'interesting' signs and such at my vet's office, and this is a new one (to me): 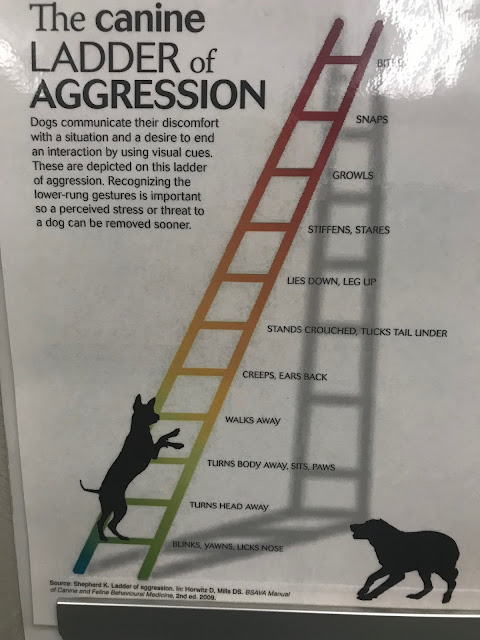 The top of the ladder is 'bites'.

I think this works for people in some way, too. But it kind of cracks me up because Comet, being a dog that was abused in her young life, goes right to the third or second ring from the top in a heartbeat.

I'm reading a good book--"My Friend Anna"--the true story of a Vanity Fair photo editor who gets caught up in a con scheme. It's fascinating. And Ann Patchett's new book gets released on Tuesday. Yay!

That cowl is amazing! I love the way it resembles large woven strands!
Great job!

The ladder is really interesting. For Hamlet, it would stop at the first step.

Really like your cowl! I agree - the ladder would work for people - lol.

Beautiful work on the yellow and blue. Perhaps it can live as a showl?

The ladder would work for humans. but would need to be considerably shorter.

Love the cowl and the blue and yellow together.
We had a previously abused dog too and he'd go straight from turning his head away to growling with no in between. WE had to be very careful with him but I loved him despite his antisocial behavior.

I love the ladder for the dogs. So important. I wish more people would train their dogs and put in the time. So many dogs we see are lunging at the end of their leashes. Worse are the nipping dogs . Thanks for sharing that information!

Love the cowl ~ that shade of blue and sunshine yellow are just great together.
I also like the ladder ~ I've never had a dog so this is very useful to me ~ it's so obvious really but good to see it set out so well. Thank you.