This is just a bunch of mishy mashy for today's Labor Day post.

You can't see them, but they're there

Saturday we drove up to Netarts (20 or so miles up the coast) to try a new (to us) restaurant called The Schooner. It was on Netarts Bay, which is a very busy fishing and clamming bay. It was good, we had the best fish and chips that I've had on the coast (and that is saying something) as well as blackened shrimp, which I liked but Tim was so-so on.

There were pelicans out in the bay. 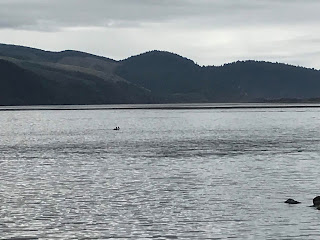 Paper Stash
I spent some time organizing my paper stash. I've ended up with lots of little bits and bobs of colored paper, and all the bits and bobs might come in handy some day, but until that day I've now organized it by colors into folders: 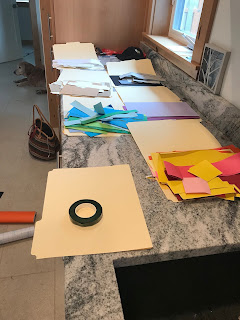 Here are all the open folders. 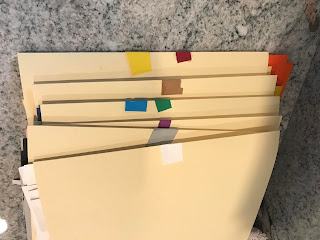 I don't need another knitting project on the needles but for various reasons I have a new one, the Storm Shawl. I don't know what yarn this is but it is very soft and it is a great yarn for dropped stitches.

The other three projects are not great 'knitting and reading' projects: the socks have a cable, the speckle tonic has a big hunk of stockinette but that is almost done, and the woven one--well, that one just feels like you knit and you knit and you don't get anywhere. Unlike Storm Shawl. 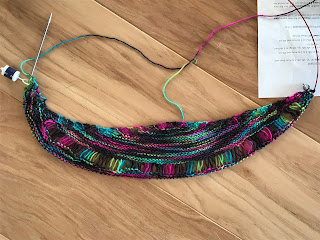 Reading and watching
Did you know the new season of the Great British Baking Show is on Netflix? And I guess not on PBS? There's a new episode released every Friday--the first one dropped last Friday.

We're also watching Season 2 of "Million Pound Menu" which is kind of a restaurant competition show, also on Netflix.

I finished "Owl Island" and it was--ok--I wanted to know how it ends and the characters were well developed but it may not be your cup of tea. It's the story of a woman who had a relationship as a college student with an older film director, and the story centers around her as an adult with an adult child when the director returns to her hometown, the titular Owl Island. And secrets secrets secrets.

Labor not!
I hope you have a great Labor Day! We will stick close to home as it is NUTS in our little beach town. We went to take the dogs to walk on the bay yesterday (figuring it might be a bit less crowded) and town was busy (as measured by the number of cars at the blinking stop light in the center of town). There appeared to be quite a bit of day drinking happening yesterday.

I'm glad you had a good mix for the weekend!
Nice job on organizing the paper leftovers!

Ooh! Love the shawl and have added it to my Rav queue. Thanks for the recommendation.

Local Ocean in Newport is my favorite place to eat on the coast. I'm not sure I've been to Netarts.