It seems like later in the term than it should be, as it has been busy and somewhat filled with stupid work stuff, but I guess that is life. Yesterday was also a bit stressful because my car had to go in for a little love--when we drove out to the coast last weekend we found that the passenger side floor got soaked. There are multiple reasons for this, ranging from the easy fix (AC tube gets blocked) to the hard fix (sunroof  and a million other things). Luckily this was the easy fix, so it is now fine, and I got an early oil change while it was in so the car should be fine through the winter.

Crown Wools
I finished the second section during the Friday night Ducks game. 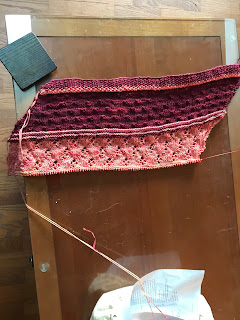 Here it is close up with the two different patterns. I kind of wonked up the lace but noticed it too late.I think it looks ok, especially from the distance. 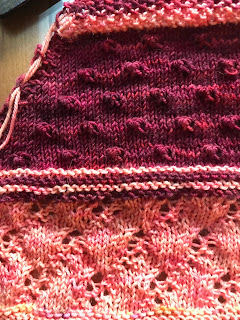 There are twelve sections so I'm one-sixth of the way done!

Llama
I started a new little embroidery project. It is actually meant to be a little doll--there's a 'backing' piece and stuffing included in the project.

I may have seen this on My Modern Met? But I'm not sure. 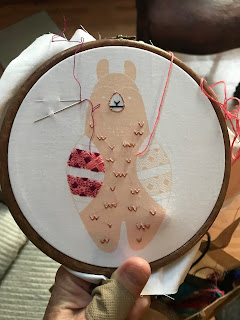 The design is from Kiriki  Press which is a new-to-me designer who makes mostly 3D patterns. They are very cute, imho, and they range from easy to hard, which is also nice.

This llama has a new (to me) stitch to me, couching, which is covering up a long length of yarn with little stitches to hold it down. It's a bit fiddly but I like it.

You should know I check out all your links to embroidery. You are stirring the Let's Add Something Else To Do bug in me.

I love your shawl work ! I don't see any issues!

I sent Al your sticker . Today was a tough day for her. So I'm so glad I got to give her a smile. via YOU!

The kids give me stickers but I never know where to put them. My computer is already full. Ideas?

The shawl is coming along-nice work; it looks enjoyable!
The new embroidery is so sweet!