Off my crafting game

Tuesday, Tim was at work in Corvallis (half an hour north-west of here) and called at the end of the day to say that the guy who is cutting down trees on the coast for us was going to be able to do that on Wednesday. Tim wanted to be there, so he drove out to the house after work Tuesday, and so I had to adjust a few things here so the dogs were 'covered' on Wednesday. He got home about 9 last night--some of the trees came down, but the winds picked up and so they couldn't get the ones we wanted taken all the way down removed.  The forecast is for it to be a bit less windy today but still 'breezy'. We'll see what happens.

But, I did get this little stuffie done.
Here it is still on the hoop: 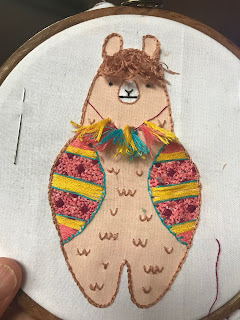 And here it is after I sewed it together and stuffed it: 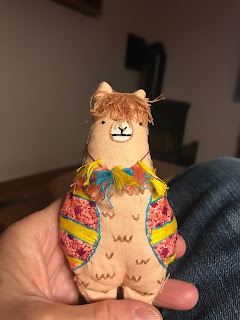 It's pretty cute, but it wasn't the most fun I had embroidering. But it is always good to try new things.

It's amazing how "little" things can throw you completely off.

Bummer on the trees and the maladjustment issues....I sympathize on that.
BUT the little alpaca is adorable--you did him proud!

How cute is your 'stuffie'! That's not an expression we have over here . . . and I love it!