We're due for a rainy weekend here, so there should be plenty of time for crafting. I don't really have a compelling book to read but luckily that is what football is for.

I've worked a bit more on the Crown Wools: 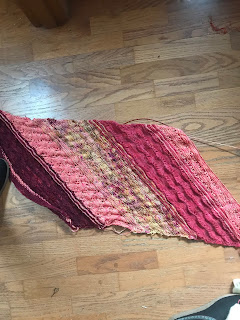 I'm on the fifth section (I think there are either 12 or 14, probably 14, and I think the colors I picked out are playing nicely together). As you can see, I'm kind of mixing up the 'order' based on what I think looks best adjacent to one another.

Here's a bit of a close up of the two most recently patterns: 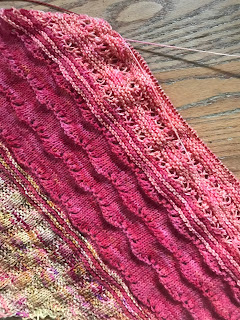 The one on the farthest right is kind of a fake lace, which is kind of a fun pattern for people who don't like lace (me). It is worked over four stitches. On the first two stitches, you P2tog, k2tog, P2tog all in the same two stitches (2 turns into 3 stitches). On the next two stitches, you P2tog then K2tog and then slip the second stitch on the right needle over the first stitch. So that turns 2 into 1, and total is 4 stitches (3+1_. I like it!

I also liked the wavy one but it is kind of fiddly lace.

We went to the symphony on Thursday--the centerpiece was Mahler's "Titan" symphony. Apparently a lot of people don't like Mahler. I like Mahler, and really like three of the four movements of Titan (third movement, not so much).

I think I've mentioned that we're doing yoga, yes? It is going well, and it seems fairly simple to fit in a half hour practice a few times a week. I've also made the decision to cut back on caffeine. I'm not happy about this but I think it is time. It starts on Monday. Wish me luck!
on October 19, 2019

Do you get headaches without caffeine? My caffeine is Dr Pepper, and I definitely "suffer" when I don't drink one for a while.

It might be better to wean yourself off caffeine instead of cutting it altogether at once! I think the variety of knit patterns would be very interesting to knit!!! Beautiful!

You know, Fireman and I just have to start yoga. There is a place 15 mins away that is highly recommended.
Thanks for the reminder!