It's that time of the academic term where the craziness piles on top of the craziness. We have four weeks left, and you throw Thanksgiving in there and it is a fast and speedy end to the term. The students have LOTS to do, which means that I have LOTS to do, and I'm also actively recruiting for our next Master's class, so I feel like sometimes it is a rollercoaster and sometimes a runaway train.

On top of that, I'm having some SERIOUS issues with a few people at work (admins) and need to be in a much, much better place with them or else I'm going to explode.

But let's talk about nicer things. 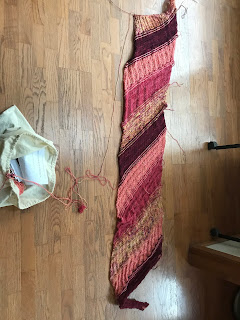 I'm really enjoying section 11 which has a simple lace aspect and a cable. 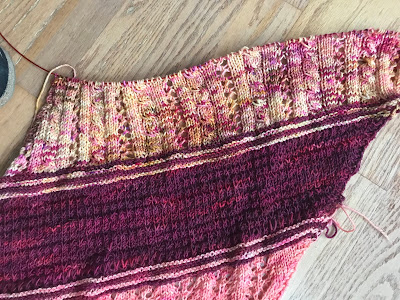 I read a quick book called "Living with the Monks" by Jesse Itzler. I think it was on Prime for $2.99. Anyway--it was a fast read and pretty interesting--but he didn't really Live with the Monks--he spent two weeks there. And the monks were the Monks of New Skete--those famous dog training monks.  And he's a self-made gazillionaire married to the woman who founded Spanx. Anyway---it was pretty much what you would expect (they work hard! they are very focused! they don't care about stuff!) but it was kind of a fun read.

Watching
We watched "Laundromat" on Netflix last night--the Meryl Streep/Steven Sodenberg movie about the mess that the US financial system is in. It was interesting but kind of hard to follow if you don't know anything about international finance (that's me raising my hand). But. Meryl Streep.

The All-Day Thing
Averaged out, it was pretty good. Hearing from former PhD students and their accomplishments was great. My panel was well received. So that was the afternoon. The morning was a lot of people talking about themselves. That was not as interesting.

Today
I need to rake leaves and do some work. It looks like a nice day so I'm happy to get going!

I watched Laundromat recently and found it hard to follow in places, too, but it was interesting.

That scarf is really growing! Sorry tern is getting so crazy;
it's to be expected but still tough to go through!

All you can do at this point in the term . . . is climb aboard the bobsled and ride it all the way down! WhEEEE! XO

Oy! What's your best advice to the mother of a grad student who is finishing her 4 heaviest weeks. Then one class left in January before graduation. She' s not come undone....but.......
her boyfriend leaving her last month did not help in any way shape or form.

Your knitting is so beautiful!!!!! I can see how smart you enjoys the pattern changes!