One of my goals for the next week is to get the craft room a bit more cleaned up. I started this morning, with the goal of trying to figure out what yarn I want to take out to the coast to knit with during the holidays and what I want to make with it. I came up with some good ideas. 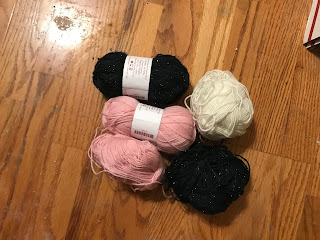 I had made a cowl with this Knit Picks yarn that has a thread of silver sparkle in it (hard to see) and I think I probably have enough for a pair of mittens or gloves. The Broad Street Mittens take 300-350 yards which I think I have.

The pink isn't a perfect match for my lovely pink duffle coat (it is Isaac Mizrahi for Target that was part of Target's whatever years of designers at Target and I love it, even though it is  pretty impractical for rainy Pacific Northwest Weather.

Here is the pink held up to the coat: 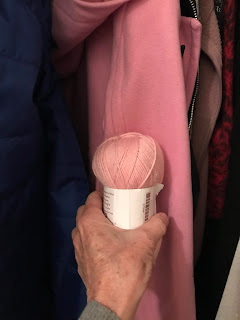 I think if I focus on the black and use just a little bit of the pink I should be OK.

I also found two skeins which have to be socks for me (also sparkly): 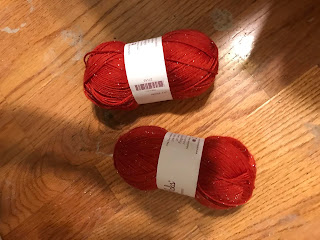 I found a bunch of Blue Sky fibers woodstock worsted--I think at one time I had the goal of making a fair isle scarf, but now I'm thinking I might do one or more fair isle hoods using the Friend of the Forest hood pattern. All these colors have different levels of 'going together'--and the red is really a fox colored yarn. 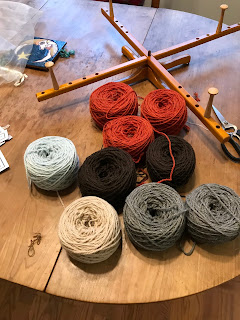 AND I found some yarn for Almina! I had looked at the yarn I thought would work and it turned out I only had 600 yards total and 200 were already part of a WIP (which I really like, I'm not sure why I gave it up, although I would guess it is because the pattern requires a bit more concentration than I was ready to give to it). Anyway, I found this from an indy dyer in Portland--I think it is sport weight and the pattern calls or Worsted but oh well I think I can make it work. 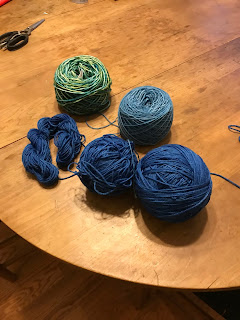 It's the blue in the front, a color called Chihuly.

Behind that on the left is a green worsted from Knit Picks which is going to be a hat for me. The light blue is Socks that Rock in a really pretty light blue which could be socks--I just like the color and thought I'd wind it up. It would be good for something cables, which I like for socks.

So that's what--six or seven projects? Plus the Great British Baking Shawl. And the socks I'm working on for Tim. And Speckle Tonic.

Your planned projects sound great. I love the colors you selected. I think the pink will look nice with your coat.

Girl, you make me want to go through The Stash and look for sparkles and great yarn names.

Isn't it fun to let your creative imagination just go a little wild? All that planning and sorting is fun (and especially as the semester ends; I'll bet you need that kind of creative planning activity)! XO

Oh, what lovely yarns and patterns you have percolating in your brain!
Have fun with them and we will enjoy watching them grow!