December is already speeding by! This is the last week of classes, filled with student presentations and meetings with students who put off meeting with me for the whole term (yay?).  Next week Tim is at a conference in San Francisco and it is finals week--I'll have grading and little dribs and drabs of meetings and then we go back out to the coast for three weeks. That is definitely a yay! 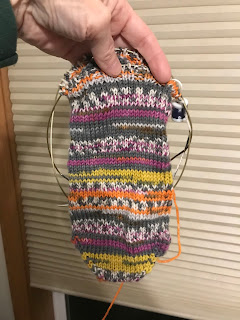 This colorway is probably a bit out of Tim's wheelhouse but I think the large amounts of grey, black and white make up for the yellow and the orange. Anyway, these are going well, they are fun to knit (mindless sock knitting ftw) and cheerful.

The Starless Sea
I'm almost done but taking this slow because it is so, so beautifully written. And now I"m going to re-read The Night Circus over Christmas.

Toe
I didn't tell you all that I broke/sprained my pinkie toe Friday night (jammed into a piece of furniture). I had a similar incident on the other foot two summers ago, and the process that Poor Toe is going through is much the same (and it MAY not be as bad as the other toe, which took a long, long time to heel).

Making It!
Do you watch this craft competition on NBC? We do (Tim isn't that crazy about it). I"m kind of excited it started up again last night.

I haven't heard of the craft competition (but then I don't really watch TV...). I love the sock - what is the yarn and colorway? Ouch on the toe - hope it is not very painful and that the healing is quick.

I broke the middle toe on my left foot much the same way a year ago, and it FINALLY quit hurting in September. I imagine the pinkie would hurt more. Toes move more when we walk than most people think. Love the sock! Self-striping yarn is so much fun to knit. I hope your final week goes smoothly so you can get some rest at your coast house.

I'm sorry for your pinkie pain--it's a misery to have anything wrong with our feet! Nice work on the sock--I would love to know the yarn brand, too.

Oh no! I'm sorry about your toe. I broke my pinky toe, again (about the 99th time I think!) about a month ago. Thankfully I've had 1 pair of shoes I can wear all along but it still aches and bothers me when I sleep. Why does the mattress touching it hurt but not my shoe or sock??

Speaking of socks, love the sock you're knitting. Self striping/patterning yarn was the best invention ever!