The decorations are down and put away*. We did that yesterday morning while watching the Rose Parade, and then in the afternoon we watched the Rose Bowl where our Ducks pulled out a squeaker against Wisconsin.

New Year's Eve was very rainy, although there were fireworks from a little before midnight til about 1. That was much better than last year when they started at about 7pm and just kept going. We watched "The Irishman" which was a good NYE movie--3 1/2 hours long and interesting enough (and well-acted) that we stayed up.

The shawl
Well, I'm on the last part of the MKAL shawl and this should serve as a reminder to me as to why I don't like MKAL. 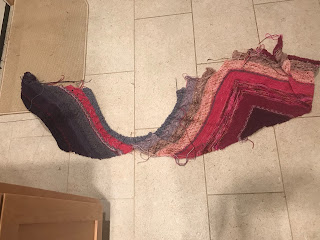 The last part is basically 'filling in' the triangle to 'match' the other triangle. It's fine. I'm not crazy about this pattern. I love the colors but the whole shebang is kind of uninspiring to me. Oh well. Live and learn.

Reading
I finished "The Daughter" which I liked although the 'back and forth' got tedious and the final twist in the last chapter got me rolling my eyes like no one's business. I have another book by the same author called "The Playground" which I'll read (it is described as "Big Little Lies" meets "Lord of the Flies" which is a bit too high concept but yeah). Today my plan is to curl up with a book and knitting and enjoy one of our last days on the coast this trip.


One last view of our Christmas tree. 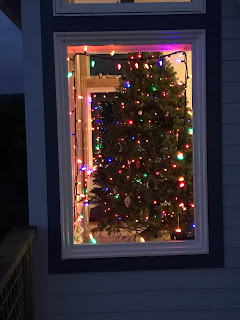 *Almost all---one ornament was left on the tree and I heard it there when I hefted the tree over the deck to let it fall on the driveway, where Tim chopped it up. After he filmed a slo mo video of it falling. Anyway, I was certain that whatever ornament it was would be a goner, but Tim found it unbroken. Amazingly, it was an old glass ornament that I *think* was sent to us from my Aunt and Uncle.  It is a little house with a giant turkey. 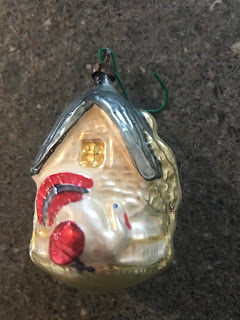 That's one tough ornament! Your time at the coast house sounds like it has been relaxing. Aren't you glad you built the house there.

Every year, I seem to leave one ornament on the tree when I'm JUST SURE I've checked. (We usually retrieve it, but still.) Glad you were able to find that exquisite ornament unscathed! (And I hate MKALs, generally. I guess I just like to know what I'm knitting ahead of time. . .) Enjoy every last drop of your break. XO

You're the first people I've heard of watching all of "The Irishman" in one go. Everyone else has taken two, three, even four days to finish it.

I loved The Irishman (and I'm not much for movies) - we watched it Thanksgiving day before dinner. Amazed and glad the ornament survived (giant turkey!!). your break sounds like it has been really nice. I worked a few hours on the 23rd and then just came back yesterday. So glad this week is a short one!

I struggle with books that bounce me back and forth in time, too. Movies that do that irritate me, too. Because.
I'm so glad the ornament survived-amazing little adventure! lol