We watched all the playoff games this weekend, mostly because we needed some down time and also because the weather pretty much sucked. That's a lot of football (4 games) which translates into a lot of crafting time. All of the teams we were rooting for won except the Vikings but honestly I'm not that invested. I would like to see KC and Green Bay in the Super Bowl, if I had to pick right now.

In addition, I prepped this week's classes, and did some stats runs for a paper I had collected data for but hadn't started writing up. There's a 3/1 deadline for a special issue where the paper might work (it might not, so I won't invest a ton of hope and dreams into it). I also got a student's project set up in the sometimes-confusing survey software. So yay for me!

Let's see what I knit, shall we?

I'm making The Easy Bulky One with a few differences. I'm not using bulky yarn, I'm using this yarn, several skeins of which were gifted to me perhaps by my twinnie? I like the hand so much I bought a few more, and this was the yarn that didn't get taken to the coast for Christmas. I counted and did math and figured I had enough for this sweater (but bought a few more skeins just in case) and thought I'd try a striped sweater.

It starts with the yoke-- 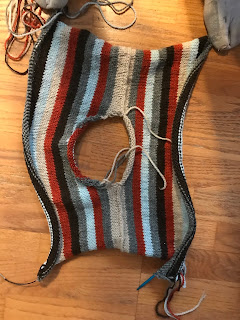 And then the yoke goes in the round: 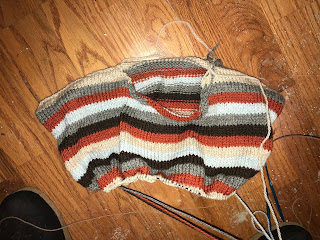 So now this is mindless knitting for the next foot or so, except for the changing of the color every four rounds.

This really is an easy sweater, and I think I went through a 'no more sweaters' phase but now I'm in a 'no more MKAL or shawls or scarves' so this seems to be a good place to be (there is one more shawl I want to make though, but it isn't a mystery and I have the yarn for it).

Brightness!
Do you have strong opinions on Michael's and Joanns? Not for yarn, but for other crafty things. In Eugene, we have two Joanns and one Michaels---I've had better luck getting some stuff at Joanns (like embroidery stuff) in Eugene. At the coast, there's only the Joanns half an hour from us, and my last visit there was not good--unhelpful people and some confusion over their coupons (is it me, or does Joanns tend to have six different coupons that are very confusing? Michael's tends to have lots of stuff on sale and one coupon for either a big amount over a full priced thing or a little amount over the whole purchase). So I went to Michael's on Saturday (Tim needed to go to the Best Buy in the same shopping plaza, then we went to a Brew Pub for lunch).

I prefer 12"x12" paper, and Michael's had none (but that's ok because I bought some at Joanns on the coast) but they did have a BIG SALE on this: 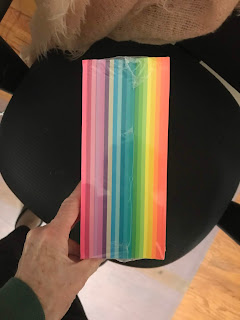 I also picked up some foil for the foil quill machine and checked out the 'blank glass' they had for glass etching--much better prices (and selection) than Joanns.

Look at you go with the sweater! Wow. Neat start. Thanks for the information on that. I was thoroughly confused when I saw the photo!

Oh that pattern (sweater) looks really nice. I may need to get that. I'm in the mood to start a sweater and I'm thinking bulky is the way to go (fast, I hope). I don't frequent either of those stores, so no real opinion on one versus the other. I do know that the Joann store near me (both of them) have really gone down hill in the past year. Almost no embroidery thread, poor selection of yarn, etc. (which explains why I don't really frequent it).

The sweater looks like a fun knit! Good for you!

Twinnie, I am happy they beat the Ravens but not happy at the way they treat Marcus.
]

Neither stores are in my area, but I shop both in Denver. JoAnn's is finicky about the coupon use, and I get frustrated trying to understand how the clerks are interpreting them.

Love the sweater! I used to much prefer Michael's over JoAnn's but I'm currently boycotting Michael's so.... I used to shop there at least once a week, frequently twice a week but I haven't been since May, 2019. And it's all over highlighters. LOL My family makes fun of me for being so stubborn and angry but dag gone it! If you put a sign up that says ALL highlighters are BOGO, and you hang the sign on the Mildliner highlighter shelf, then the Mildliners ought to be a part of the sale. Considering how I can hold a grudge and how much money I used to spend there, Michael's made a pretty big mistake that day.