Sixteen years ago, on Super Bowl Sunday, I re-taught myself how to knit during the Big Game (obviously, no teams I cared about were playing). I had learned as a kid from my mom, and tried again in the 1990s when I tried to knit something before I fully grasped the concept of gauge, but then I decided to try again. I learned on a Lion Brand Learn to Knit kit and the first thing had lots of holes and was made with Wool Ease. Wow, 16 years!

So today I celebrate the past sixteen years of knitting (the blog started in August of that year) and am happy to show you a partially FO: 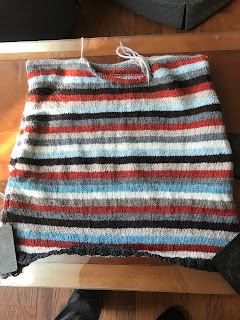 This is a vamp on a bulky sweater pattern (the yarn isn't bulky). It is Blue Sky Fibres which is a delicious yarn. The sleeves are picked up and knit and I'll try to follow this color pattern but the hard thing will be knowing what color to start with. I probably can't go too wrong? Should I start with the first color I used at the shoulder and just keep going?

I think I have seven colors in there.

I'll also make a big bowl of chili for the game and for many meals the rest of the week too.

We've got chili planned for tonight, too! A perfect winter (and Super Bowl) kind of meal. I like your stripes!

Oh my yes: "tried to knit something before I fully grasped the concept of gauge". Memories of a grey cardigan sweater that I handed off to a friend who was a lot taller than me with longer arms; she pretended it was just what she wanted and it came closer to fitting her than me, but I bet it ended life at the Goodwill.

and you have become a great great knitter Kim!!! Mean it. Happy Knitaversery!!!! And then to add your blog!!! Love love love

A worthy skill to own! Happy knitting!

Oh I do love stripes! I can't wait to see how this turns out.

The stripes are great! Looking forward to seeing how this turns out. Happy Knitterversary!!

My mother once made me a multi-color (read "leftovers") sweater, and matched both sleeves to the body perfectly. I'm still not sure how she did it.

I'm WAY behind on blog reading but wanted to wish you a belated happy knitiversary! Love the sweater!