We're over at the coast, and the way things fell out with my schedule is that we can stay here til Tuesday (we got here on Thursday).  And who knows, we may be out here for a while--Universities north and south of us have cancelled in person classes, and without having to be in classes in person the only thing I need to be in Eugene for is to have my crown put on the implant.

I get an email every 3-4 hours with updates about life on campus. I think we'll shut down in-person classes at some point, I wonder what this will mean for students who live in dorms (and many students live in apartment complexes which are basically dorms, meaning they are private bedrooms with shared kitchens and bathrooms---a student pays for their own bedroom and gets assigned to the people they'll share the rest of the space with).  Best case (I guess) scenario would be to encourage students to not return to campus after spring break (which starts two weeks from Monday), but who knows.

It doesn't seem to be a concern over here on the coast, at least for now. 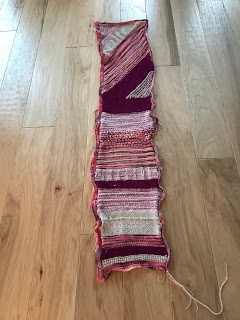 Circus Movement got finished yesterday, although it still isn't blocked yet and probably won't be til we're back in Eugene (need blocking pins!). This was a fun knit and the colors are fun. I would probably do this one again, particularly as I'm pretty sure I could use some partial skeins that I have lying around.

I bought two other knitting projects out (one to cast on, one is ABQ sunset) and also brought out a tiny needle project in case I need more to do. I played around with some cards yesterday so I have plenty of stuff to entertain me if need be!

First is The Sea of Lost Girls by Carol Goodman (Amazon Linkee provided). I have read several of her books and I guess they are in the genre of 'modern gothic', whatever that might be. Anyway, they're those kind of dark mysteries that I tend to like.

Second is Writers and Lovers by Lily King who wrote Euphoria. I really liked Euphoria. Writers and Lovers is so far pretty good---it is set in Cambridge, Mass, in a time period (late 80s/early 90s) when I lived there, so I like that, and the main character is kind of ok but kind of annoying. I'll keep going.

I have a bunch of books loaded into the Kindle in anticipation of Spring break.

I think that's about it for right now. I hope you are staying safe and not worrying too much about coronavirus.  Here's last night's sunset for you. 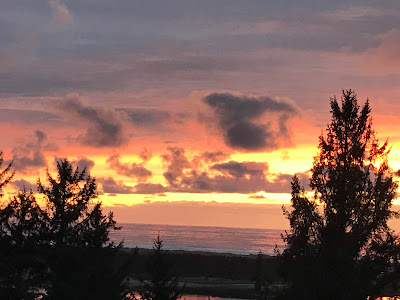 Nice finish on the scarf/shawl--
it's going to get interesting about the public gatherings for work and schools!

Well, as long as you are away from all the germs and you have yarn.... I know you will be having some good times!

Love the sunset and Circus turned out really nice!