Updates! I have updates!

It feels like I haven't written for a long time--life has been so busy but there has been a bit of crafting going on. The last time I wrote, I was headed out the door to drive up to Portland for a visit. I drove with my colleague Deb, we arrived at about 1, parked the car at the UO Portland building, grabbed a quick lunch, walked over to a great ad agency in Portland, wrangled all our students into a room, and had a great presentation on the development of a recent Nike campaign. Then walked back to the UO's building (a mile each way) and watched three students present to the President of a new environmental foundation. Then walked to our funky hotel, hung out for a tiny bit, then hosted a dinner for students and guests--that lasted til 9:45. Slept til about 5am and eventually got up, did work, met Deb and walked back to the building at 7:30. Saw four more student presentations, then I hosted a 2-hour panel at 10am, followed by a lunch, then we hit the road at a bit after 2pm. I was pooped when I got home! It was a lot of intense listening, plus student wrangling is stressful. I'm glad we only do this once a year.

The Truck
We have been talking about a truck for a while, wondering whether we should get a used one and save some money or a new one and basically never need to worry about having a truck ever again. I picked up Tim at the airport on Wednesday and we drove by a Toyota dealer on our way home and popped in just to take a look. 3 1/2 hours later we drove our new red Tacoma home. It is (as Kathy mentioned) much bigger than I'm used to, but I love sitting up high. I drove it around the block and did fine. We will use it to move stuff out to the house and then eventually it will just stay out there full time. It is a good choice for out there---as I've written about before, we generally have to travel to buy stuff we need that isn't basic stuff, and if you do that you might as well stock up on lots of things. Plus we have projects to do out there (closet organizing etc) and the truck will be good to take out supplies. So we like it.

I did a bit of work on ABQ Sunset and here we are: 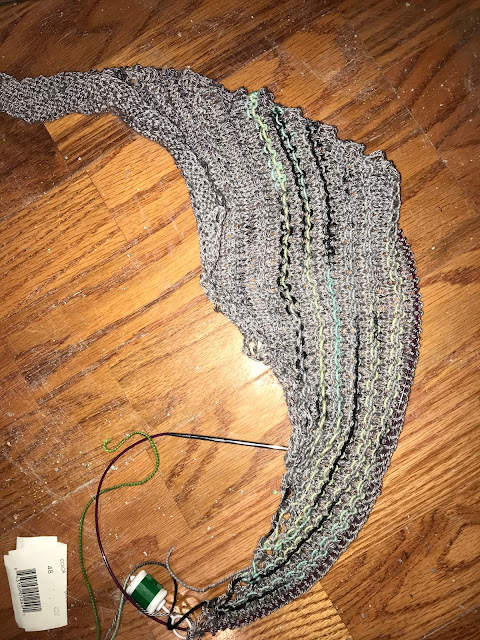 Watching
We watched "A Beautiful Day in the Neighborhood" last night and I didn't quite love it as much as most people. I think a lot of it has to do with my own troubling family relationships that I'm dealing with the best way that works for me.  We're also enjoying the third season of the Great Pottery Throw Down, which is the pottery version of the Great British Baking Show. You can find it on YouTube.

Readings
It has felt like I've had no reading time but I finished two books yesterday (we spent much of the afternoon reading and knitting -- the knitting just me). The first book was "A Beautiful Crime" by Christopher Bollen. It is set both in Venice and New York, and is about two young men who plan a con against a rich guy who has done some Bad Things. It gives some good backstory about how these two young men got to a place where they felt OK doing this con (they weren't professional con men) and it was an interesting book. I'd read something else by this author again.

The second one was by Meg Mitchell Moore and was basically a pallet cleanser. It was called "The Islanders" and is about three people spending the summer on Block Island and how their lives intersect with one another. The book was basically a less-heavy Elin Hildebrand novel set on a different island, which sometimes is all you want to read.

I've just started "The Learning Curve" and it is very promising. 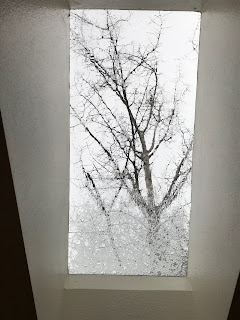 This was the bathroom skylight yesterday after a quick hail storm. I kind of love this picture.

Have a good week! Thanks for sticking with me during this update!
on March 01, 2020

Thanks for the update.

That is a wonderful picture.

Reading about your day in Portland wore me out!

A busy time helps you to savor a slow down much more! lol
The shawl is looking good! congrats on the new vehicle!

Very cool picture, but yikes! Hail?? We need warm weather. The truck sounds perfect for you.

Oh wow! The hail photo is beautiful. And of course, your knitting is too! Enjoy the new truck. Just think of all the craft supplies you can haul now. :)

Kim that is a huge event (s) that you attended. Not even including the driving! ugh. I'd be toast. GOOD FOR YOU.
Glad you like your truck! You will get a lot of use with it for hauling , etc. Happy for you.
Love your shawl. Sorry Fred's movie didn't wow you.

Fireman freaks out with hail. No ! Roof damage! NO! skylight fears. NO!

I love your shawl start Kim. and as Jeannie Gray says you can put a lot of yarn in that truck bed